Kia Offers Closest Look Yet at New Optima – But Will it Get a New Name?

The next-gen sporty midsize sedan may be called the K5. 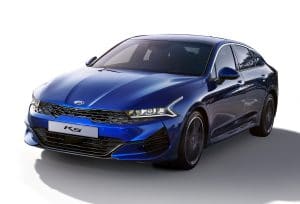 Kia next-generation Optima sedan may not carry that moniker for much longer, becoming the K5 in the near future.

Sedan sales may be tumbling in the wake of the ongoing SUV surge – enough that Detroit automakers have all but given up on these three-box designs – but Korean carmakers seem determined to hang on and, if anything, capture some buyers who need a new place to call home.

With Hyundai already scoring kudos with the latest version of its midsize Sonata, it was only going to be a matter of time before its sibling Kia would weigh in with a makeover of its own Optima model. The automaker today released the most complete images – and many of the details to go with them – of the new sedan.

But the Kia statement, coming out of Korea, seems to support recent speculation that the new model will abandon the Optima nameplate and be called the K5, instead, as part of a rebranding effort meant to move the Korean marque more up-market.

The fifth-generation Optima/K5 is bigger, more luxurious and, for the first time, it will be offered with optional all-wheel-drive – a notable contrast with the latest version of the Hyundai Sonata, which continues to be offered only with front-drive. 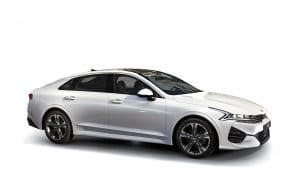 The new K5 is the Korean company’s push to make Kia a more upscale brand.

One thing the two Korean marques have in common is a focus on design, something that helped them break out of the bargain-basement part of the automotive hierarchy a decade ago. That continues with the new model.

The new sedan adopts the latest take on Kia’s familiar “tiger-nose” grille, here stretching nearly the full width of the front end and wrapping under new, more slit-like headlamps. From a profile perspective, the sedan features a chrome strip rising up the A-pillar, running along the roof line and then wrapping around the rear decklid. The back end features equally aggressive, wrap-around lighting.

Depending upon the model, the K5 will be offered with 16-, 17- or 18-inch wheels, with 19s offered on the GT version, the automaker noted, “as well as more aggressive front and rear bumpers, special ‘GT’ badges, as well as dual twin exhaust tips.” 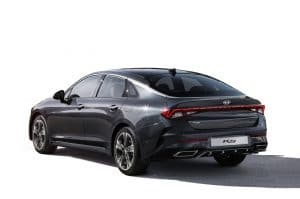 The new K5 will give Kia a complement to Hyundai’s new midsize Sonata replacement.

Inside, the move to create a more luxurious appearance carries on with more premium materials and finishes. The sedan now features a 12.3-inch digital gauge cluster and offers a 10.25-inch touchscreen infotainment display, depending on market and model. Other upscale features include adjustable mood lighting and wireless cellphone charging. There’s also an optional, 12-speaker Bose audio system. And an 8-inch head-up display is on the option list, as well.

“The K5 won’t just play a central role in strengthening Kia’s presence in the global sedan segment,” said Thomas Schemera, head of Product Division at Kia Motors Corporation. “Almost a decade on from its game-changing predecessor, it also represents the latest milestone in Kia’s transformation into a creator of desirable, world-class cars.”

The new sedan will feature an assortment of different powertrain packages, depending upon the market, with the K5 getting an eight-speed dual-clutch transmission for the first time, as well. 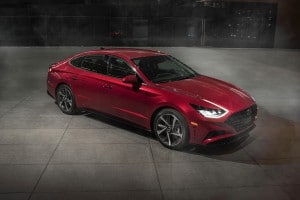 Hyundai has expanded its SUV line-up, but not at the expense of what was its bread-and-butter products — sedans, like the 2020 Sonata.

North American buyers also will be offered the K5 GT with a new, high-performance 2.5-liter turbo package making 286 horsepower and 311 pound-feet of torque. That will help it launch from 0 to 100 kph, or 62 mph, in 6.6 seconds.

The way the automaker’s news release is worded, it appears the Optima name is a thing of the past and we need to get used to calling the midsize sedan the Kia K5 in all markets going forward. That may be accompanied by new badging for the Kia name, as well.