Big updates for a little SUV. 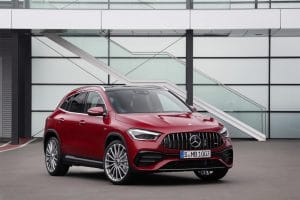 Mercedes continues to expand its line-up in the crossover and sport-utility arena with the new Mercedes-AMG GLA line-up.

What was once a limited line-up of products has morphed into one of the broadest arrays of offerings in the luxury market, and is continuing to grow, as Mercedes-Benz has shown with the recent debut of the GLB crossover.

But the German automaker also is making sure not to launch and leave existing models like the smaller GLA which quickly became one of its biggest hits ever after making its own debut six years ago.

The new version of the subcompact CUV will be offered in a variety of different configurations, including the U.S. base GLA 250, as well as the more spritely Mercedes-AMG GLA 35. And buyers will discover that the look of the crossover has been updated but that the new model has moved upmarket and added a number of new features.

That’s in keeping with what Mercedes has done with the CLA, the sedan model sharing the same platform as the GLA crossover, which moved up to make room for the brand’s new base offering, the A-Class. 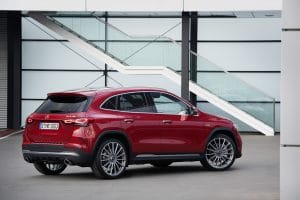 Mercedes adopts what designers like to call an “evolutionary” update to its styling for its new CLA.

The 2021 Mercedes adopts what designers like to call an “evolutionary” update to its styling. It retains more of a tall, squat wagon look than that of a conventional crossover — though the new model gains a full 4.1 inches in height, at 63.4 inches, even as its length shortens 0.6 inches, to 173.6 inches.

The wheelbase, meanwhile, lengthens 1.1 inches, to 107.4 inches. A nearly two-inch wider track, meanwhile, both enhances the apparent muscularity of the second-gen GLA while also promising to enhance its overall dynamics.

The new dimensions translate into a roomier interior, especially from the headroom perspective, something prior owners would likely appreciate.

As with the remake of the CLA coupe-like sedan, the new GLA gets a significant makeover of its cabin, adopting a more horizontal layout, on the whole, while adopting more premium materials befitting a Mercedes — am elated where both the original CLA and GLA models fell short.

Add to that a long list of new technologies, including the latest-generation Mercedes infotainment system integrating not only Apple CarPlay and Android Auto, but the MBUX voice assistant. No, experience in other models shows it’s not a replacement for Apple’s Siri or Amazon’s Alexa, but it’s still a step up, especially in terms of understanding natural speech to do things like enter a destination. 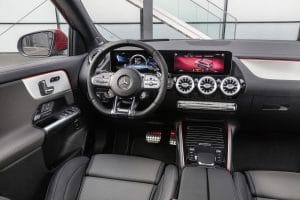 The latest-generation Mercedes infotainment system integrates not only Apple CarPlay and Android Auto, but the MBUX voice assistant.

While there’s a smaller engine package for some markets, the U.S. version of the GLA, the 250, features a 2.0-liter turbo-four making 221 horsepower and 258 pound-feet of torque. Fed through an eight-speed dual-clutch transmission you the front wheels, it will get you to 60 in about 8.6 seconds, topping out at 130 mph.

You also can opt for a 4Matic all-wheel-drive package that, based on our experience with the CLA, will be a good choice for making sure all that power immediately goes to the pavement and avoids potential torque steer.

For those who want to bump performance up a healthy notch, the Mercedes-AMG GLA 350 is the obvious choice. It’s beefed-up version of the 2.0-liter turbo — which the automaker says has been “enhanced” by AMG — churns out 302 hp and 295 lb-ft through all four wheels. 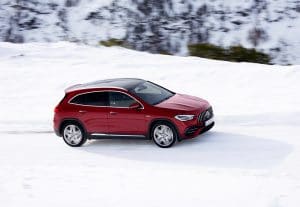 Depending upon conditions, power will normally directed up front, though as much as 50% can go to the back axle when needed. The AMG package will hit 60 mph in about 5 seconds, topping out at 155 mph.

It also gets a much more aggressive exterior, with an AMG-specific grille, among other details. Eventually, look for the even sportier AMG 45 package to round out the GLA line-up.

In the meantime, the 2021 Mercedes GLA family will start rolling into U.S. showrooms next summer, a few months after the European launch.