Not everyone wants an SUV, and the 8th-gen Sentra provides a good alternative. 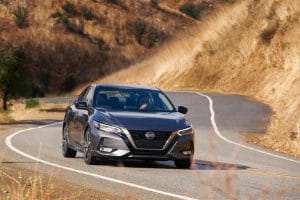 Features like Intelligent Trace Control, as well as a new, multilink suspension, translate into a much more dynamic ride with the 2020 Nissan Sentra.

The sedan is dead, or so goes the current conventional wisdom. There’s no question that sales have taken a tumble as SUV fever sweeps across America, but as Mark Twain might have said, “reports of the demise of the sedan have been greatly exaggerated.”

They still account for about a third of the U.S. market, notes Rob Warren, a marketing manager at Nissan. And, he adds, sales of compact sedans have held up a lot better than for midsize models, sales expected to come to around 4 million this year. There’s a good reason why Warren smiles when he points that out, considering his latest assignment has him overseeing the launch of the 2020 Nissan Sentra.

Just starting to roll into U.S. showrooms, the Sentra is one of the most important models in the Japanese automaker’s line-up, nearly on par with its best-seller, the little Rogue crossover, and the industry’s third best-selling compact sedan overall. First introduced 37 years ago, Nissan has sold 6 million Sentras. And it’s betting it can hold pace with the launch of the eighth-generation model, in part, by picking up customers from brands like Ford and Chevrolet that have largely abandoned the sedan market. 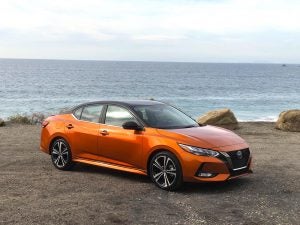 The new Sentra remains affordable, with a base price just under $20,000.

Some manufacturers have adopted the strategy, “if you can’t beat ‘em, join ‘em,” opting for more ute-like designs for their sedans and hatchbacks. Nissan has gone the other direction with the ’20 Sentra, opting to enhance its appeal by making it more luxuriously sporty and far less boxy.

For one thing, the sedan’s all-new platform is both 2 inches lower and 2 inches wider than that of the outgoing model. That translates into more leg and shoulder room yet, surprisingly, sacrifices virtually no headroom thanks to some creative engineering.

Visually, it generates more attention than some of the segment’s familiar bland-mobile designs, with a new take on the Nissan family’s V-Motion grille, slim headlights, and a floating C-pillar. Overall, those extra two inches give the 2020 Sentra a more planted and aggressive appearance, with a bit of a wedge to the overall shape making it look poised for motion.

It’s in the interior that the new sedan particularly stands out. Nissan likes to claim it offers “class above” design and features. That really plays out here, in a segment where automakers routinely cut corners. The initial impression is that the cabin has been upgraded with more luxurious materials, especially when you catch the details, such as the orange accents on seats in the SR model, along with soft-touch fabric that covers the entire armrest, rather than just the back end where an elbow might rest. A “D”-shaped steering wheel and air vents influenced by the GT-R sports car add to the sporty feel. 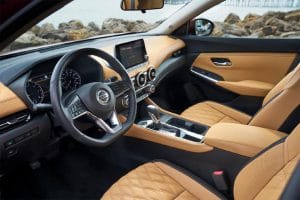 The 2020 Sentra’s interior is both roomier and much more lavishly appointed.

The new Sentra accepts modern realities, with storage pockets, nooks and crannies for things like cellphones and keys, never mind plenty of cupholders. The upgraded infotainment system displays on a standard 7-inch touchscreen, with an 8-inch package available with navigation. The Sentra also features Android Auto and Apple CarPlay.

That’s just part of the high-tech upgrade the ’20 sedan has undergone. There are three USB ports up front, including the latest USB C. The eighth-generation Sentra is offered with radar-guided Active Cruise Control and an Around View monitor. And a basic version of Nissan’s Safety Shield 360 advanced driver assistance system comes standard – with features like Forward Collision Warning and Driver Attention Alert.

There are also several features meant to enhance the overall drive, including Active Ride Control, Vehicle Dynamics Control and Intelligent Trace Control, the latter subtly using individual brakes to help hold the vehicle in place as it sweeps through an aggressive corner.

Nissan has wisely simplified the Sentra line-up this year, offering only S, SV and SR grades, and minimizing option choices.

From a mechanical standpoint, all three versions share the same, 2.0-liter naturally aspirated inline-four engine making 149 horsepower and 146 pound-feet of torque. Those aren’t overwhelming numbers but the Sentra offers a bit more pep than they might suggest. 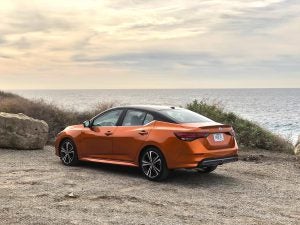 Meanwhile, fuel economy numbers are straight out impressive, the S and SV trims coming in at 29 mpg City, 39 Highway and 33 Combined. For the SR, the figures are 28/37/32.

If there’s any surprise, it’s the fact that Nissan chose to skip the turbo route many competitors, such as Honda, have begun adapting. Less surprising was the decision to stick with the continuously variable transmission, or CVT, used on the older Sentra – and so much more in the Nissan line-up. The good news is that it’s been tuned nicely and largely eliminates the dreaded motor-boating associated with so many CVTs. If anything, it simulates a traditional step-gear transmission in many circumstances. That’s particularly so when you switch to “sport” mode.

The wider stance of the new Sentra is more than just cosmetic, incidentally, providing a more dynamic and solid stance. The new multilink suspension system, enhanced by features like Trace Control, give you a better feeling of being in control than with the outgoing sedan. It also helps that there’s now just enough body roll to give you a clear feel of what the car is doing. No, it’s not the sportiest car in the compact sedan market, but it now offers a far more engaged driving experience than you’d traditional associate with the Sentra badge.

Despite the marked improvement in the 2020 Nissan Sentra, the sedan still carries a price tag those on a tight budget could appreciate. The base S model starts at $19,090 – before factoring in $925 in delivery fees. The top-line SR jumps to $21,430. Add in the premium package and those delivery fees and you’re still coming in at under $25,000.

The Sentra has always had its appeal – which explains why it’s routinely the number three model in its segment. The 2020 makeover takes things up a few notches, and in virtually every category. If our first drive is any indication, Nissan should be able to not only hold onto existing buyers but also attract customers from brands like Ford and Chevy that have been exiting the sedan market. Not everyone wants an SUV, despite conventional wisdom, and the 2020 Sentra provides a solid alternative choice.