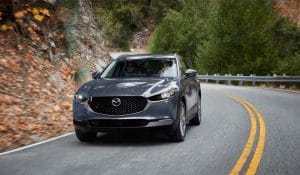 Mazda’s rolled out its new small crossover, the CX-30. The new vehicle sits between the CX-3 and CX-5.

In this SUV-crazed era, automakers are looking for every possible bit of “white space” to slot in yet another offering. We recently reviewed the new Mercedes-Benz GLB as one example and, earlier this month, got the chance to drive the 2020 Mazda CX-30 which, somehow, manages to carve out a niche we didn’t know was there between the Japanese automaker’s current CX-3 and CX-5 models.

The name might be confusing. One would expect the new crossover to be called the CX-4. Mazda offers the explanation that there’s a very different SUV by that name on sale in China. Okay, perhaps. When we dug a bit deeper, one senior insider also admitted we just might see more future models opting for a double-digit designation.

That won’t really matter to those who check out the new Mazda CX-30, however. It’s by no means perfect. We’d appreciate a wee bit more zoom from the zoom-zoom brand. But in terms of styling – both inside and out – handling and features, Mazda has come up with a winner. So we discovered during a long drive from San Diego to Palm Springs earlier this month, a trip that gave us a chance to experience the new crossover on freeways, back roads and everything in-between.

Visually, the 2020 CX-30 delivers the latest take on Mazda’s distinctive Kodo, “Soul of Motion,” design language. As it has evolved, the Hiroshima-based carmaker has moved away from the heavy chrome and other extraneous accent details most of its competitors opt for. The CUV’s face is surprisingly simple yet elegant, the vehicle overall featuring sumptuous curves that play with light like good sculpture. 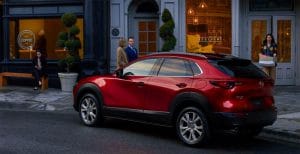 The new CX-30 offers plenty of style and room for four people.

The use of what Mazda designers call a “Sori Curve” also has the effect of making the CX-30 look larger than its actual dimensions. They’ve also enhanced the apparent width in a functional matter with a tailgate that is markedly broader than on the smaller CX-3.

If there is anything on the exterior that might create debate it’s the use of plastic cladding around the wheel wells and rocker panels.

Where Mazda stylists have really excelled is inside the cabin which has a clear, class-above feel. As with the exterior, there’s an elegant simplicity, without all the added detailing meant to make it seem you’re getting more than you paid for.

As with the tailgate, Mazda went with a broad dashboard enhancing the sense of width of the CX-30. The centerpiece of the cabin, meanwhile, is the infotainment display that is positioned relatively high atop the center console. It demonstrates the thinking that Mazda’s product development team put into the new car. The placement makes it easier to glance over without taking your eyes off the road for long and, by pushing the screen back a bit, it’s easier for older eyes to focus on the display.

Where Mazda could touch off another controversy is the decision to no longer operate the screen by touch. Instead, you resort to voice controls or the rotary knob on the center console. That actually fits in with our personal taste. Touchscreens have some value but not when it requires you to gaze at them like you do a smartphone in order to, say, zoom in and out on a map. That’s much easier to do with a knob. There is a bit of a learning curve, Mazda officials cautioned, though they claim motorists who’ve tried the system for more than a day or two tend to find it quite comfortable.

The new CX-30 continues to use the brand’s Kodo exterior styling.

Seating in the new Mazda CX-30 is great, especially up front, though the back is a bit cramped. One of the other interesting moves the automaker has made builds on research showing how the human brain perceives the world smoothly even as our head – and eyes – bounce up and down while walking. How they’ve coped with this concept is intriguing, but a bit too complex to explain here in detail. Suffice it to say, it translates into the visual perception of a much smoother ride.

If the overall appearance of Mazda’s latest entry seems somehow familiar, no surprise, the new crossover sharing much of the basic SkyActiv underpinnings of the small Mazda3. A key difference: the CX-30 boasts 7.9 inches of ground clearance, 2.4 inches more than the sedan – though it’s also three inches shorter in both length and wheelbase.

No, this is not a true trail blazer but Mazda claims it can handle a moderate amount of off-roading, and there’s even a button that adjusts traction control to ensure better grip off pavement – something we did not have a chance to prove out during our long day’s drive.

In on-road conditions, the CX-30 lives up to the reputation Mazda has long had for delivering a sporty but well-mannered driving experience. The extra ride height does not seem to matter when you’re cornering aggressively, as we did negotiating the serpentine highway leading out of the mountain and down to Palm Springs. 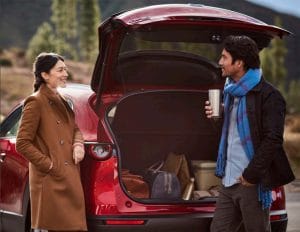 The CX-30’s design allows for plenty of room in the crossover’s cargo area.

Mazda’s unique G-Vectoring Control Plus, or GVC+, system helps the crossover mind its manners, even under aggressive driving.

One of the other peculiarities of the CX-30 was Mazda’s decision to require a bit more brake pressure than you might otherwise expect. It was something that took a few minutes to get used to but seemed sensible once mastered.

The CX-30 is offered in both front-wheel-drive and all-wheel-drive trim. All versions share a 186-horsepower, 2.5-liter inline-four engine lifted from the Mazda3. Fuel economy comes in at 24-25 mpg City and 31-33 mpg Highway depending upon the choice of FWD or AWD.

To be honest, we’d love to see it get the 250-hp turbo-4 found in the CX-5, something that would give the smaller crossover a nice bit of additional pep. But the naturally aspirated package is more than acceptable.

With a base price of $21,900 – before adding $1,045 in delivery fees – potential buyers might find the 2020 Mazda CX-30 one of the more reasonable options in its class – especially when you factor in such standard features as LED headlamps, rain-sensing wipers, lane-keep assist, emergency brake assist, and adaptive cruise control. Surprisingly, though, you have to upgrade to the Select Package for Android Auto and Apple CarPlay.

The infotainment system for the CX-30 lets the driver use voice commands or a simple knob.

The base car has a reasonable amount of features, but there’s a lot more that can be added, from the head-up display to the premium Bose sound system. There’s even an onboard WiFi system that supports over-the-air updates. For now, that covers only new software for the infotainment system, not vehicle controls, however.

Add pretty much everything available and you’ll nudge it just more than $30,000 with delivery included.

For those who don’t quite need – and don’t want to spend for – the bigger CX-5, the new Mazda CX-30 will be a sound alternative. If anything, the relatively modest jump in pricing could draw some potential buyers out of the smaller CX-3.

Mazda has delivered a solid choice for those looking for a compact but fun-to-drive crossover. It’s not perfect, but it’s one of our new favorites in this increasingly competitive segment.