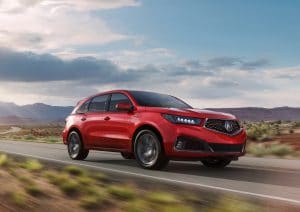 The 2020 Acura MDX A-Spec is impressive enough to compete with German luxury marques.

The conversation around luxury vehicles has been dominated by German makes for what seems like forever.

But if you take the time to drive one of the new vehicles from Acura, Honda’s upscale marque, you can’t help but wonder why.

For example, at first glance, the 2020 Acura MDX all-wheel-drive A-Spec seems like one of the multitudes – I exaggerate but not much – of upscale, midsized utility vehicles that are primarily used for shuttling around the suburban neighborhoods in every corner of the country.

However, once you climb behind the wheel and push the ignition button your perceptions already have begun to shift because you seem surrounded by a most impressive level of comfort and craftsmanship.

I found the 2020 Acura MDX also responded to the various challenges out on the road quite smoothly and efficiently and with an ease not always found in the vehicles from its German rival. If you want a smooth ride, the MDX with its 4-wheel-independent suspension delivers. It’s hard not to notice the bumps driving around Detroit and Ann Arbor but the MDX delivered quite effectively.

In addition, the 2020 Acura MDX was surprisingly maneuverable for midsize utility and agile enough for some heavy-duty urban driving around the heart of the Motor City. The steering is responsive, the brakes were very good and the visibility from the driver seat was great, which add to the high marks that I thought the test vehicle got for ride and handling. 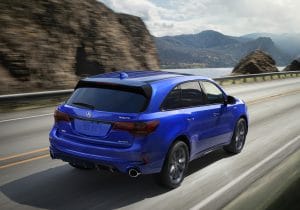 The MDX A-Spec offers a smooth ride in town and off-road capability when away from it.

The vehicle also performed well on the semi-rural roads outside of Detroit and at higher speeds on the local freeways where quick response is always welcome.

The powertrain in the MDX that I drove was built around 290-horsepower V6 VTEC engine that was matched up to a nine-speed transmission and all-wheel-drive. The power from the engine was delivered quickly so the vehicle took off from a standing start quickly. At first, I was surprised by the quick response but quickly settled back to enjoy it as the MDX pulled away in traffic or on the freeway.

The shifts of the nine-speed transmission were so efficient they were barely discernible as the vehicle answered to the demands of the throttle or brake. The all-wheel-drive system also works to stabilize the vehicle on wet or slick pavement of which there was a lot during the autumn rains that are harbingers of the winter weather in the southeastern corner of Michigan.

Adding to the comfort of the driver of a 2020 Acura MDX is the full array of driver assistance features that are available. The MDX I drove, which was priced at $56,295, including the $995 transportation charge, was equipped with features such as adaptive cruise control, collision-mitigation braking, road-departure mitigation, forward-collision warning, lane-departure warning and lane keep assistance as well as blind-spot warning lights. 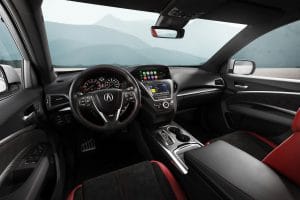 The Acura MDX A-Spec has a slew of advanced driver-assistance technologies making for a safer drive.

The advanced driver-assistance features, coupled with MDX’s maneuverability and responsiveness offered a sense of security while out on the road or highway with the MDX, which I suspect is something most owners would come to appreciate.

The 2020 Acura MDX is also equipped with an ELS Sound system with HD and satellite radio and a navigation system that can respond to voice commands thanks to voice recognition software that comes with the vehicle.

Design of utility vehicles is always a challenge for manufacturers, but Acura clearly put some thought and effort into it as the front grille and fascia looked distinctive and the vehicle looked impressive in silhouette standing at the curb.

The A Spec model that I drove also was outfitted with a special appearance package and 20-inch alloy wheels, which enhanced the look of the vehicle’s all-important corners and included fog lamps in the front.

The A Spec designation also added features on the interior such as sports seats with Alcantara inserts and contrast stitching as well as sport pedals. The use of push button shifter also freed up critical space in the interior of the vehicle and didn’t seem to slow the vehicles in standard maneuvers such as moving from reverse into drive. 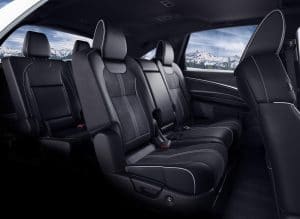 There is plenty of interior space in the Acura MDX A-Spec, including three rows of seats.

Overall, I thought the design of interior held together and blended a mixture textures and materials into a pleasing but not over whelming interior. The overall impression was one sophistication that was also aimed at keeping the driver and passengers comfortable on long trips or long commutes in heavy traffic.

The interior of the 2020 Acura MDX was very quiet in traffic and a quiet interior without road noise or other sounds creeping in is also guaranteed to relieve stress while on the road.

The 2020 MDX all-wheel drive was a nicely balanced vehicle that well deserved to be included in any discussion of luxury utility vehicles.