Ferrari Pushes Back Arrival of Full Electric Model Until 2025 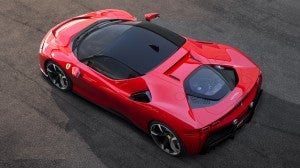 Ferrari’s new SF90 Stradale is a hybrid that puts out 986 horsepower and will hit showrooms next summer. It won’t get a fully electric sibling until 2025.

Most automakers seem to be rushing to get their first electric vehicles to market as quickly as possible, however, one of the world’s best known sports car makers, Ferrari, appears to be dawdling along like a Sunday driver when it comes to EVs.

The renowned Italian maker of super cars is pushing back the date it expects to have its first fully electric vehicle ready for the market by three years to 2025, Chief Executive Louis Camilleri told reporters while at the company’s plant in Maranello, Italy.

Ferrari previously noted it would have an EV ready at the end of 2022. Reuters reports that analysts said didn’t expect it to arrive before 2023, but the company’s top official pushed that deadline further out.

“The battery technology is not where it should be yet,” Camilleri told reporters. There are problems the company is still working through. 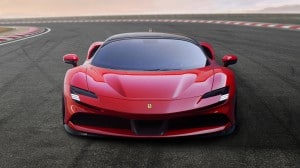 The new SF90 Stradale can travel 84 miles in electric-only mode.

“There are still significant issues in terms of autonomy, in terms of speed of recharging. So eventually we will come out with one. But it’s post-2025. Not in the short term,” he added.

Camilleri said Ferrari was “certainly” considering a fully electric grand touring car, but that it would stick to hybrid vehicles for the “current foreseeable future,” Reuters reported.

(Ferrari plugs in, charges out with its first-ever plug-in, the SF90 Stradale)

The company isn’t completely without any electrified product. Earlier this year, it rolled out its first-ever production hybrid, the SF 90 Stradale. Like many other sports car maker, Ferrari is using the electric motors to up the performance quotient on the Stradale.

Ferrari wants 60% of its cars sold by 2022 to be hybrids. Camilleri said the group was also considering alternative technologies for its cars, including hydrogen and biofuels, Reuters reported.

“We are looking at various powertrains and trying to see what would be the most efficient and effective in terms of what our vision is for Ferrari cars in the future,” he said.

While the significant delay on a battery-electric vehicle is disappointing, investors can still cling to the fact that financially, the company is performing well. Last month Ferrari raised its guidance for this year’s earnings to 1.27 billion euros, or $1.4 billion. It added 2020 should bring strong results as well.

(Ferrari offers a V-8 Tribute with its F8 Tributo)

“We’re about to close another record year, we did pretty well on all the metrics, volume, revenues, income, cash flow. So you’ll see a lot of smiling faces around here,” Camilleri said.