Officials from Fiat Chrysler Automobiles and Groupe PSA have inked a binding memorandum of understanding, or MoU that is expected to led to their formal merger in 12 to 15 months.

The agreement, which comes six weeks after the two automakers confirmed they were interested in combining forces. Barring any unexpected regulatory obstacles, the deal would create the world’s fourth-largest automaker by volume – and the third based on revenues – positioning the successor to Detroit’s old Chrysler Corp. ahead of its long-time rival General Motors.

“This is a union of two companies with incredible brands and a skilled and dedicated workforce,” FCA CEO Mike Manley said in a statement confirming the latest developments. “Both have faced the toughest of times and have emerged as agile, smart, formidable competitors. Our people share a common trait – they see challenges as opportunities to be embraced and the path to making us better at what we do.”

The signing of the MoU comes as a significant personal development for Manley, who is widely expected to become chief operating officer at the combined company. Last spring, he oversaw efforts to merge with PSA’s French rival Renault collapse at the last minute in the face of opposition by the French government. 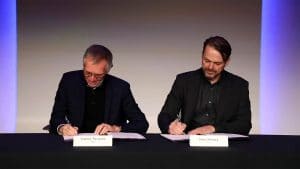 The signing of the memorandum of understanding means the merger is all but certain to be completed by late 2020 or early 2021.

In fact, finding a merger partner became a goal even before Fiat and Chrysler combined forces a decade ago. The late Sergio Marchionne, Manley’s predecessor, was convinced that the industry needed to consolidate and spent years wooing potential partners including Volkswagen and GM.

That Detroit competitor last month filed a racketeering lawsuit against FCA claiming the small automaker used bribes to win contract concessions from the United Auto Workers Union giving it unfair advantages in the market. GM also claimed in its 100-page court filing that FCA wanted to use that to pressure it into a merger. Fiat Chrysler has denied those allegations.

There had been some concern that the lawsuit might impact the FCA-PSA negotiations, but the signing of the MoU makes it clear that both sides want to move ahead on the merger as quickly as possible. At this point, the biggest challenge they face will be clearing any anti-trust concerns raised by regulators in the U.S. and Europe.

Should all go according to plan, the MoU calls for the creation of a 50/50 “merger of equals.” PSA’s CEO Carlos Tavares and FCA’s Chairman John Elkann will retain those roles after the merger. What is unclear is where Fiat Chrysler’s current Chief Executive, Mike Manley, will wind up, but two senior insiders told TheDetroitBureau.com he is expected to assume a position as chief operating officer.

A key reason behind the planned merger is the need to develop electrified, autonomous vehicles – like this plug-in Chrysler Pacifica modified for self-driving by Waymo.

Officially, the combined company will have its headquarters in the Netherlands, where FCA currently is based. It plans to retain major regional offices in Italy and France, as well as the combined corporate and technical center based just outside of Detroit that was originally built for the old Chrysler Corp.

Based on current numbers, the new company would have revenues of nearly €170 billion, or $189 billion, making it the industry’s third-largest company. Combined sales of 8.7 million vehicles would position it as the fourth-largest automotive manufacturer, behind only Volkswagen, Toyota and the Renault-Nissan-Mitsubishi Alliance – but ahead of General Motors which has been retrenching as it closes or sells off operations like its European Opel/Vauxhall subsidiary.

The two companies hope that a merger will help them improve their economies of scale, potentially saving billions of dollars, especially when they combine R&D efforts covering two of the most significant technologies expected to transform the auto industry: electrified and autonomous vehicles.

Meanwhile, the deal is expected to leverage each other’s strengths to address their weaknesses. PSA, for one, has been hoping to reenter the U.S. market after abandoning it nearly three decades ago. But it is far stronger than FCA in Europe. And the two companies hope that, together, they can build momentum in China, the world’s largest automotive market, where they both are weak.

For the moment, at least, FCA and PSA insist they won’t order cutbacks and closures in their home markets. Indeed, the UAW’s new contract with FCA, ratified the same day as the FCA-PSA merger agreement was approved, provides significant protections for the automaker’s 47,000 U.S. hourly workers. If anything, it calls for $9 billion in new investments during the next four years while securing or creating 7,900 jobs.

Nonetheless, industry analysts say that Tavares, as the new CEO, will come under pressure to drive down costs.

“The merged group will have to make massive savings and probably also close plants, even if the CEOs’ choice of words is different,” NordLB autos analyst Frank Schwope wrote after the binding agreement