Volkswagen’s menacing ID.R racer has set five records in four countries, on three continents, everywhere from Pike’s Peak to the Nurburgring, as well as the annual Goodwood Festival of Speed – so it came as no surprise when it was named the “Electric Race Car of the Year” by Germany’s Automobilsport magazine last week.

What seemed to many like a one-off curiosity when it first rolled out, the ID.R has turned out to be a glimpse of the future, at least as far as Volkswagen is concerned. Going forward, the 670 horsepower race car will serve as the anchor of the brand’s Motorsport division, the German automaker planning to halt development of piston-powered models going forward.

That underscores the automaker’s massive commitment to electrification, the Volkswagen Group – which includes brands as diverse as mainstream Seat and Skoda, as well as luxury marques Audi and Bentley – plans to roll out nearly 50 all-electric models by 2025. Roughly half will bear the VW marque’s familiar badge.

(Volkswagen concept IDs a Space Vizzion of the future) 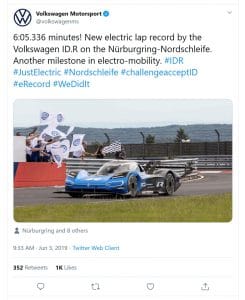 Since the earliest days of the auto industry, racing has served a dual purpose, among other things putting a halo around a brand’s image. But it also can serve as a “trailblazer” for the development of new technology – in this case all-electric drivetrains, said Volkswagen Motorsport Director Sven Smeets.

“On the one hand,” he said last month, “it serves as a dynamic laboratory for the development of future production cars and, on the other, as a convincing marketing platform to inspire people even more towards electric mobility.”

In its first two seasons, the ID.R proved itself a formidable competitor. It lapped the Nurburgring Nordschleife in 6:05.336, a full 40 seconds faster than the previous EV record holder. And other records have toppled during the Pike’s Peak and Goodwood hill climbs, among other events.

It’s important to note that the shift in motorsports strategy covers only the VW brand, sibling marques Audi and Bentley, maintaining their own programs wrapped around the internal combustion engine. That said, Audi is also committing resources to electrified racing. On Nov. 22, it clinched a victory in the first of the season’s Formula E races in Saudi Arabia.

(VW’s U.S. CEO has seen the future, and it’s all about SUVs and BEVs)

Like the VW brand, Audi has big plans to get into the battery-car market. It launched its first all-electric model, the e-tron SUV, earlier this year, and debuted a second, the e-tron Sportback, at last month’s Los Angeles Auto Show. That models will be followed by the e-tron GT sports car sharing its drivetrain technology with the new Taycan from another VW Group brand, Porsche.

While Volkswagen is so far the only traditional automaker to commit to going all-electric with its motorsports program, it is by no means the only one investing in battery-powered racing. Both Mercedes-Benz and Porsche are competing in Formula E for the first time this year. And electric vehicles are competing in a growing series of traditional series, such as the World Rally Car program.

One of the concerns is how fans will respond. Formula E barely survived its first two seasons, though by the end of last year’s program, twin races in Brooklyn were sellouts.

And even conventional race programs are exploring their battery options. Hybrid power is now the norm in both Formula One and the Le Mans endurance series, with NASCAR expecting to follow in a couple years.

It remains to be seen if VW’s move will be seen as prescient or too far ahead of the curve.