We'll soon get a look at Ford's "Mustang-inspired" electric Mach-e SUV. But could there be a Mustang coupe EV in the works? TheDetroitBureau.com checks out the prototype Mustang Lithium debuting at SEMA. 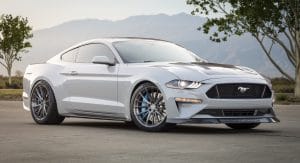 Two weeks from now, we’ll get a first official look at Ford’s new all-electric, “Mustang-inspired” SUV. But what might it be like to have the real Mustang plug in? We’ve learned that a hybrid version of the pony car is in development but, now, Ford is teaming up with auto supplier Webasto to give us a look at what that just might look like.

For now, they caution, the Mustang Lithium is a “one-off prototype,” but the fact that the partners also note that it will be used as a “testbed for battery and thermal management technologies” comes across as a clear indication that Ford really does see electrification in Mustang’s future.

“Ford has made no secret of the fact that we are electrifying our most popular nameplates,” said Hau Thai-Tang, Ford’s chief product development and purchasing officer. “This one-off Mustang prototype is a great opportunity for us, together with Webasto, to showcase to our customers what a new electrified powertrain can do for performance in a car they already know and love.”

What’s particularly intriguing is that the Mustang Lithium is making its debut at the 2019 SEMA Show, an annual aftermarket event that traditionally puts the emphasis on things like superchargers, crate motors and other performance parts and accessories. The Ford stand at the Las Vegas Convention Center has plenty of products, including Mustangs, that follow this more familiar route. 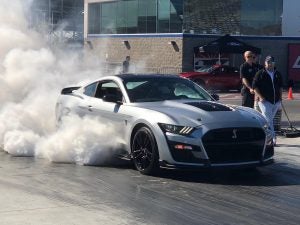 The Webasto Ford Mustang Lithium punches out 140 horsepower more than the Shelby GT500, and 375 more lb-ft of torque.

But, with virtually every automaker committing to add at least some electrified models to their product lines, the question is what the future might look like. The good news is that the latest generation of battery-based vehicles have moved far beyond the stone ponies we saw at the beginning of the decade, vehicles like the Ford Focus Electric, the Nissan Leaf and the Chevrolet Bolt.

And Ford isn’t alone trying to get that message across. Archrival Chevrolet is using SEMA to debut its E-10 Concept, a battery-powered remake of the 1962 C-10 pickup that can run the quarter mile in under 14 seconds.

The preliminary information Ford and Webasto are revealing about this “electrified and street-ready beast” suggests it would readily chase down the current, 5.0-liter V-8-powered Mustang GT, and perhaps even the new Shelby GT500. That exotic model’s supercharged 5.2-liter engine punches out 760 horsepower and 625 pound-feet of torque. But the Mustang Lithium manages to deliver 900 hp and 1,000 ft-lbs of instant-on torque.

While neither of the partners is ready to talk specific performance numbers, they promise “stunning quarter-mile acceleration.” For comparison’s sake, the Shelby GT500, as tested late last month by TheDetroitBureau.com managed to go through the traps in around 11.16 seconds.

Ford recently offered a teaser showing off the “Mustang-inspired” Mach-e electric SUV it will debut at the Los Angeles Auto Show.

There are some intriguing bits of information in the Ford-Webasto news release. For one thing, they say that the Mustang Lithium features a six-speed manual transmission. Virtually every battery-electric vehicle now in production, or coming soon, features a single-speed gearbox. An exception is the Porsche Taycan which uses a two-speed box on one axle, a single-speed box on the other.

Like the Taycan, the Mustang Lithium features an 800-volt drive system which helps not only punch more power to the wheels but also speed up charging times. There is no information, yet, about the size of the battery pack, but Ford officials have made it clear they wouldn’t bring a new BEV to market that couldn’t handle more than 200 miles, and 300 where possible.

From a visual standpoint, the charger port is one quick way to spot the difference between the Lithium and more conventionally powered Mustangs. The prototype, according to a Ford statement, “is low and sleek, with custom carbon fiber body components, a 1-inch lowered stance and 20-inch staggered fitting forged wheels. 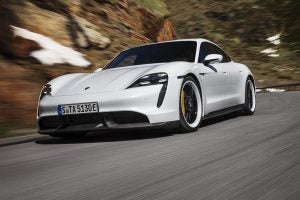 Ford insiders say they’d like to challenge the Porsche Taycan with an all-electric Mustang coupe.

As you’d expect at SEMA, there are plenty of performance accessories on the Mustang Lithium, including Ford Performance half shafts, a Super 8.8 Torsen differential and lightweight Forgeline wheels wearing Michelin Pilot Sport 4S tires.

Ford is set to reveal its first long-range electric vehicle at the Los Angeles International Auto Show two weeks from now. It is expected to be called the Ford Mustang Mach-e and be offered in several different configurations, including an electric SUV take on the classic Mustang GT.

TheDetroitBureau.com spoke to a number of Ford officials, including several connected with the classic Mustang program, last month and came away with a clear sense that the automaker is working up various electrification options for the Mustang coupe. That ranges from hybrid to all-electric, though it is not clear whether the latter concept has been approved for production. It may take some experience with the Webasto concept vehicle to help sell the Ford officials controlling the purse strings to give such a model the green light.

“Very similar to Ford’s push for vehicle electrification, this is an innovative way to further the technologies we’re developing to enable vehicle electrification while creating a vision of how cool the future of electric performance will be,” said Mark Denny, Webasto Customized Solutions North America President and CEO.