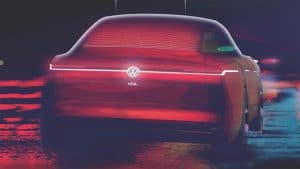 VW isn’t yet offering any clues as to what sort of EV concept it will unveil in Los Angeles later this month.

Volkswagen will pull the wraps off a new battery-electric concept vehicle Nov. 19, as part of the build up to the annual Los Angeles Auto Show. Exactly what’s in store is uncertain, but the event will set the stage for the unveiling next year of VW’s first long-range electric vehicle targeting the U.S. market.

The carmaker has committed more than $12 billion in its drive to electrify, with about 50 battery-electric models due to market by 2025 through the Volkswagen Group’s various brands. The flagship VW division recently introduced its ID.3 hatchback in Europe, while the Audi e-tron is already in U.S. showrooms. The Porsche Taycan is also in mid-launch mode.

All told, VW is laying plans to produce about 1 million BEVs annually by 2022, with factories in North America, Europe and China to share production duties. The first of those, in Zwickau, Germany, officially ended production of gas and diesel-powered vehicles this week. On Monday, it rolled out the first saleable ID.3 and will add other products during the next several years.

“The ID.3 is a high-tech car from a high-tech factory,” said Thomas Ulbrich, Volkswagen Brand Board member for E-Mobility, in a statement. With some 1,700 robots, driverless transport systems and fully automated manufacturing processes, Zwickau gives a contemporary insight into the shape of forward-looking high-volume production of EVs.” 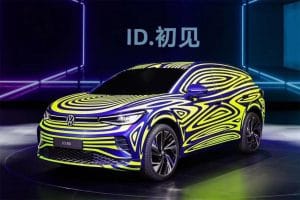 The automaker has teased the ID.4 hatchback which is likely to be the first of its long-range BEVs for the U.S.

Exactly what will debut at the Petersen Automotive Museum in November hasn’t been announced but VW is continuing to roll out concept vehicles that, if past serves as prologue will serve as harbingers of what’s to come in production.

That was the case with the show car that became the ID.3 and another that will return as the production ID Buzz electric Microbus. It would surprise no one if the L.A. show car presages the new electric SUV planned for the U.S. market.

In fact, VW has confirmed there will be a number of BEVs coming to the States, including the ID Buzz. The Microbus will be assembled in Mexico, but at least two battery-cars will roll out of the automaker’s assembly plant in Chattanooga, Tennessee, which will soon undergo an $800 million expansion to handle the vehicles.

There are plenty of questions about the potential size of the U.S. market. Some forecasts predict that American motorists will be buying more than 1 million, and perhaps twice that number, of plug-based vehicles by mid-decade.

Not everyone agrees, Chris Li, a senior director at J.D. Power and Associates telling TheDetroitBureau.com that the adoption rate is “still stuttering,” and likely won’t see a real boom until prices fall, range expands and there’s a nationwide battery charging infrastructure in place.

The production of the ID Buzz will be handled in Mexico, with VW gearing up plants around the world to produce as many as 1 million BEVs annually by 2022.

“We have a lot of EVs coming,” he said, estimating various automakers will put as many as 122 models in U.S. showrooms by 2025. That “could propel demand,” Li added, though he also cautioned that it is far from certain there will be “enough volume to go around.”

Increasingly stringent emissions rules in Europe could help provide the necessary market for VW – and its EV competitors – but it is China where the German automakers seems to be placing its biggest bets. The Beijing government has enacted some of the world’s most EV-favorable regulations, the New Energy Vehicle, or NEV, mandate last year pushing sales to more than 1 million for the first time – a figure including both BEVs and plug-in hybrids, or PHEVs. Demand dipped a bit when consumer incentives were cut in July, but most China hands expect the EV market there to bounce back.

It currently is erecting a new BEV factory in Shanghai and has two other plants that will produce electric vehicles in China. That could help it get a running start after being slow to chase Chinese domestic rivals like EV-focused Nio and BYD. VW also has to contend with the fact that Tesla is gearing up to launch production at its own Shanghai plant, something that is likely to happen in the coming weeks. Whether VW can hit a target of 500,000 EV sales in China remains to be seen, but UBS analyst Patrick Hummel believes it will be able to outsell its U.S. rival.

Along with the Zwickau plant and two older factories in China, VW also plans to switch from internal combustion models to BEVs at three other German plants in Hanover, Emden and Dresden, as well as another in the Czech Republic.

The massive effort will not only be costly but risky, analysts caution, considering all plug-based vehicles still account for barely 2% of global demand. On the other hand, if market acceptance grows over the coming decade, VW CEO Herbert Diess’s investment plans could position the automaker as one of the leaders – if not the top manufacturers – in the EV market.