Reeling from a scandal that has taken a heavy toll on the union’s credibility and reputation, acting UAW President Rory Gamble announced a series of what he described as ethics reforms.

The union also plans to sell a house attached to its education center in Northern Michigan. The house known as “Cabin Four” on the UAW’s books was completed last year and used by former UAW president Dennis Williams and has become emblematic of the UAW’s lax internal culture, which ignored unethical behavior by union officers and officials.

“When the United Auto Workers union was created more than 84 years ago, it was built on the idea that the whole is greater than the sum of its parts; that together we are stronger than any one person alone. And this is still true today,” said Gamble.

“This is just the beginning,” he added. “But it’s a beginning that will set us on the right path for the future,” Gamble said. 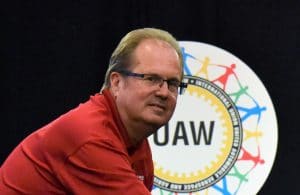 Gary Jones, president UAW International, has taken a leave of absence in the wake of several of his aides being charged in an ongoing federal investigation.

UAW President Gary Jones took a leave of absence earlier this month after two of his closest confidants in the union were charged for their part in a scheme that funneled millions of dollars in union funds for personal use. Federal investigators also found more than $30,000 in cash during a search of Jones garage in late August.

In all, nine different union officers, including two former UAW vice presidents, have been charged. Federal authorities also said a third former UAW vice president, General Holiefield, was the beneficiary of a corrupt bargain with executives from Fiat Chrysler in which money from joint company-union training funds were used to pay off the mortgage on his suburban Detroit home.

Gamble said the crackdown on unethical behavior includes the creation of an “Ethics Ombudsman” to receive, review and respond to ethics complaints and allegations.

The Ethics Officer will not be an employee of the International Union, but rather an external position with the power to investigate allegations, complaints or matters referred to them by the Ethics Ombudsman or the IEB.

The UAW is beginning a national search for an Ethics Officer effective immediately, Gamble said.

The union will set up an Ethics Hotline to encourage those who may have concerns about or want to report potential ethics violations. The hotline will provide members and employees the ability to anonymously and confidentially submit allegations or complaints about potential violations of the UAW’s Ethical Code and other relevant policies.

The UAW also is putting in place a new policy that will enhance enforcement against those who have been found guilty of misusing funds and our commitment to seek recovery of all misused or misappropriated funds.

The change changes also call for the implementation of stringent monetary controls that increase oversight by the UAW Accounting Department, which ironically was once headed by Jones.

The banning of all charitable contributions from UAW joint program centers funded by the union’s contracts with General Motors, Ford and FCA, vendors, or employers to any charities run or controlled by UAW officials.

The enactment of accountability measures to the Joint Programs, including that purchases of promotional items using joint program funds have been permanently banned and all expenditures will be controlled, monitored, and regularly audited by independent public accounting firms.