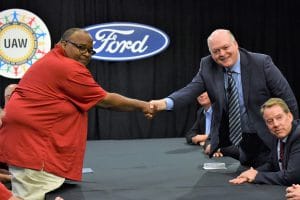 The proposed deal between the UAW and Ford was ratified with 56.3% of workers approving the pact.

Members of the United Auto Workers ratified a new four-year contract with the Ford Motor Co. that is patterned after the agreement the union reached earlier with the General Motors Co.

The final tally released by the union showed that 56.3% of the union members voted to ratify the contract, covering 55,000 Ford hourly workers in the U.S., the union said Friday evening. The new deal includes a $9,000 signing bonus, general wage increases of 3% in the second and fourth year of the agreement and 4% lump-sum payments in the first and third year.

Ford also promised $6 billion in new investment in Ford factories in the United States. The contract also clears the way for Ford to close an underutilized factory in Romeo, Michigan, north of Detroit that builds V8 engines.

“Every Ford employee and temporary employee will be at the top-rate for full-time status at the end of this four-year agreement,” said acting UAW President Rory Gamble, who is Director of the UAW Ford Department. 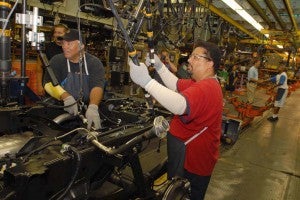 Ford’s large plant in Chicago voted down the agreement between the automaker and UAW, but the deal was approved in spite of that result.

“This is a life-changing contract for many and provides a template for all future Ford UAW members to a full-time, top-rate status. There will be no more permanent temporary situations and no more permanent tiers,” said Gamble, noting the agreement will make 4,000 temporary employees now on Ford’s payroll full-time workers with higher wages and better.

Gamble said the UAW will now move on to finish a new labor contract with Fiat Chrysler Automobiles N.V.

In a recent interview, Gamble told AFP that the talks at FCA will present a challenge for the union because the company has more new and temporary workers than either Ford or General Motors. About 13% of FCA employees are either new or temporary workers, compared to 7% at GM where the union’s concerns about the two-tier wage system led to a 40-day strike.