2021 Toyota RAV4 Prime puts a premium on performance, as well as fuel economy. 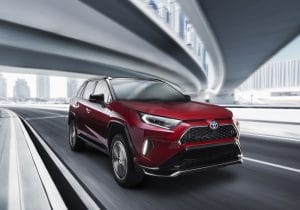 Toyota continues to exert its leadership among small SUVs with the 2021 Toyota RAV4 Prime.

Toyota was a pioneer of conventional hybrid technology with the launch of the original Prius almost two decades ago. But it has remained skeptical of more advanced battery technologies like plug-in hybrids and pure battery-electric vehicles.

While we’ll have to wait to see what the Japanese giant does in the BEV space, it appears to be betting that plug-ins finally are ready for prime time. And with the launch of the new 2021 Toyota RAV4 Prime, it doubles the number of PHEVs in its U.S. line-up.

The new model will offer a number of potential advantages, including 39 miles of all-electric driving, as well as the best mileage of any RAV4 model. But with Prime, Toyota is shifting away from its classic formula – which has it use electric drive technology almost exclusively to increase fuel economy. In the case of the 2021 RAV4 Prime, it seems, the plug-in also will be “the most powerful and quickest RAV4 ever,” Toyota boasts. 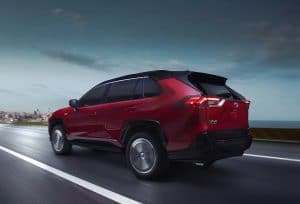 The new RAV4 Prime can travel 39 miles in electric-only mode.

There’s a growing split within the auto industry as to where to place one’s bets on electrification. Some manufacturers, like General Motors and Volkswagen, anticipate the future will see a switch to pure battery-electric drive. Ford and Mercedes-Benz, among others, think that the market will split between conventional hybrids, plug-ins and pure EVs.

For its part, Toyota has long believed that conventional hybrids alone were the answer. But, as pressure to deliver extended, all-electric driving range increases, the Japanese automaker has begun exploring other options. That includes both hydrogen fuel-cell vehicles and plug-in hybrids.

It started, mid-decade with the original Prius plug-in and, three years ago, added the current Prius Prime.

Meanwhile, a variety of shifts have occurred in the U.S. market. For one thing, Prius sales have sharply tumbled, reflecting both cheap gas and the explosive growth of SUVs and CUVs. In fact, the RAV4 has become Toyota’s best-selling product line, toppling the long-time king-of-the-hill, the Camry sedan. 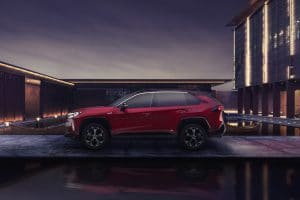 The RAV4 Prime puts out 302 horsepower, a full 83 hp more than the conventional RAV4 Hybrid model.

(Toyota Corolla named finalist for Green Car of the Year)

So, it would seem to make sense to have the crossover lined-up to become the second Toyota product to plug-in, so to speak. And it’s not just green-minded buyers who are likely to appreciate the move.

The RAV4 Prime has a similar layout to the conventional hybrid version of the crossover, but it gets a larger lithium-ion battery pack and  more powerful motor-generators. They’re paired with a 176-horsepower, 2.5-liter Atkinson Cycle gas engine. Combined, the system pumps out a solid 302 horsepower, a full 83 hp more than the conventional RAV4 Hybrid model.

To put things in another perspective, the Prime model cuts a full 2.0 seconds off the 0-60 sprint, at 5.8 seconds, making it by far the fastest RAV4 ever.

The new version, which comes to market next summer as a 2021 model, also is rated at 90 MPGe, or 90 miles per gallon-equivalent. 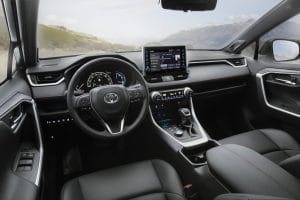 And it will be offered with a number of new features, including the first RAV4 head-up display system.

As with the rest of the RAV4 line-up, the Prime will feature as standard equipment the

As for pricing, the 2021 Toyota RAV4 Prime is expected to carry a premium pushing up the price of the Hybrid model by several thousand dollars. But final figures won’t be announced until closer to its on-sale date.