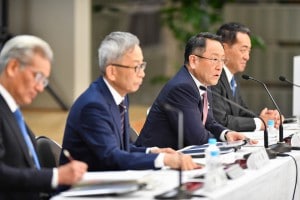 It’s been a tough year for the auto industry. And not just in the U.S., where sales are off by nearly 2% this year. China, the world’s largest automotive market, is expected to end the year with an 8% decline, according to the China Association of Automobile Manufacturers. And both Europe and Latin America are also running in the red.

Therefore, it’s no surprise so many manufacturers are watching their bottom lines fray as they struggle with declining sales while, at the same time, having to ramp up investments in long-term bets on autonomous and electrified vehicle technologies.

There are a few exceptions, a handful of companies that have defied the downturn, posting stronger global sales and earnings, however. And few stand out more than Toyota, which “has thrived over the last two years, in defiance of the industry downturn,” wrote May Arthapan, the director of Asia-Pacific Forecasting for LMC Automotive.

After falling short of expectations during the fiscal year that ended March 31, 2019, the Japanese giant is blazing its way back. True, it fell slightly short of what analysts had anticipated, coming in at $3.87 per ADR versus the consensus forecast of $3.94, according to Zack’s. But that was still solid compared to the $3.59 Toyota reported for the July-September period, its fiscal second quarter, in 2018. 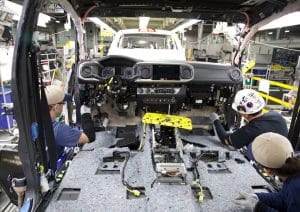 Toyota’s defied the odds, enjoying positive sales in the U.S. through its first two quarters of FY2020.

The automaker’s operating profit, meanwhile, was up 14%, to 662.3 billion yen, or $6.1 billion, for the latest quarter. That was its best performance for the period since 2015. It helped that sales for the period jumped to 2.75 million, up from 2.18 million a year earlier.

True, Toyota has cut its global sales estimate for the year. But where some key competitors are hoping to hold their losses to single digits, Toyota still anticipates it will see global demand grow by 2.7%. Significantly, its fiscal second-quarter sales surged 5.6% in North America and 3.4% in Asia. If the revised forecast is accurate, it will top last year’s 10.6 million sales by hitting 10.7 million worldwide.

And that puts it in a very good position to regain its crown as global king of the hill, pushing aside Volkswagen AG and the Renault-Nissan-Mitsubishi Alliance, both of which are dealing with their own problems.

While there are some trouble spots in Toyota’s portfolio – Europe posing challenges to just about every manufacturer – It is defying the global industry downturn in markets where it matters most. Perhaps nowhere is that more apparent, said LMC’s Arthapan, than in China where, she noted, “Toyota is on track to grow its volume by 8% this year, on top of a 16% increase in 2018.”

Several new products appear to be driving the automaker’s strong performance in China, as well as North America. 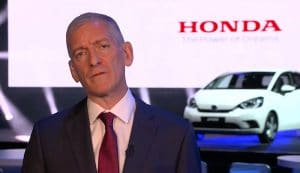 Honda’s Tom Gardner says the company is accelerating its plans to sell only electrified cars in Europe by three years.

“New models of the RAV4 and the Corolla, as well as last year’s Camry, have been well received in North America, so we’ve been able to lower incentives,” Operating Officer Kenta Kon told reporters during a sales briefing earlier this month.

Toyota has long been the dominant player in Japan, and its dedication to the home market has sometimes been costly, especially as it has bucked the trend by rivals such as Nissan and Honda to move production offshore to more cost-effective locations. It may be paying off now, however, as Toyota is expecting to increase production in Japan by 8% this year, the biggest increase worldwide.

That said, not all is going smoothly. When it comes to plant operations, the automaker is pushing hard to keep costs under control, going so far as to try to capture “every last drop” of paint, said Executive Vice President Mitsuru Kawai during an earnings conference call. That only “would represent only a fraction of a yen in savings,” he suggested, “but if we add up these efforts we can build a savings effect.” 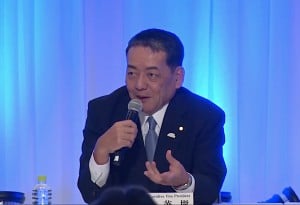 Toyota EVP Shegeki Terashi discusses the automaker’s plans to accelerate its BEV program with the media.

Some things are likely out of Toyota’s control however. One reason the automaker cut its full fiscal year sales forecast is the slowdown in India, Indonesia and Thailand. But there are other wildcards. The current year marks the first real slump in Chinese vehicle demand since that market exploded onto the automotive scene two decades ago. It is far worse this year than originally forecast, with few experts confident about what will come in 2020. And the same could prove to be the case in the U.S. where a new poll by CNBC-SurveyMonkey found 65% of respondents expecting a recession to begin in 2020.

“As the saying goes,” according to LMC’s Arthapan, “all good things must come to an end. Toyota’s run on successful product cycles is no exception as we anticipate a 1% decline in the group’s global Light Vehicle output next year.”

Whether that will happen is uncertain, but even the possibility doesn’t appear to be worrying investors – especially after the automaker announced a $1.8 billion stock buyback.

Jesper Koll, a senior adviser at WisdomTree Investments has alerted investors that he sees Toyota a “very strong” stock to buy. As long as motorists continue to feel the same way about its vehicles, it could continue to defy the global challenges that have been hammering so many of its competitors.