The Best Way to Travel This Thanksgiving Holiday

Gas prices are reasonable so now it's all about when to drive. 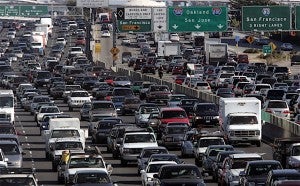 More than 49 million drivers are expected to hit the roads this Thanksgiving weekend.

For most folks, Thanksgiving means family, football and food. However, for about 49 million people, it will mean getting in the car and hitting the road for the holiday.

This decision to travel for the Three Fs (family, football and food) can be miserable or miraculous depending upon a variety of factors. Some are beyond their control, such as gas prices, while others, such as when to drive.

When it comes to the former, drivers will find gas prices mostly similar, if not cheaper, than last year’s holiday, according to AAA. Today’s national average is $2.59. That is just a few cents over the 2018 holiday weekend average of $2.57.

(Skip the deals on TVs and toys, get a new car on Black Friday)

“During Thanksgiving week last year we saw the national gas price average decrease a nickel between Monday and Thursday, that could be the case again this year,” said Jeanette Casselano, AAA spokesperson. “AAA recommends holiday road-trippers use the AAA app to find current gas prices along their route.”

Today, 61% of all gas stations in the country are selling regular unleaded for $2.50 or less. On the week, gas prices are flat. Now, what you’ll ultimately pay will depend upon where you are located. Basically, if you are somewhere in the south, you’re going to enjoy cheaper prices than if you are, well, anywhere else.

Now that it’s been determined what motorists are going to pay, it’s important to know when to go. Fortunately, Google Maps has some insight to share about that, and the first thing to know: Don’t leave the night before. 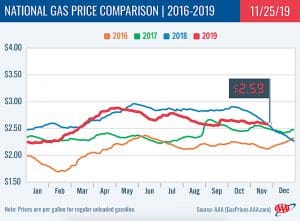 “Across the country, the data is clear: Traffic peaks the night before Thanksgiving,” the site notes. “The situation looks particularly bad between 10 p.m. and midnight, so if you can, avoid leaving during the traditional after-work hours. You might want to avoid traveling on Wednesday altogether, as tie-ups hit in the morning and afternoon, too.”

Looking for a smoother ride on the way back? Well the website suggests taking it easy on Friday and staying put to enjoy leftovers and then making the trip on Saturday.

(Americans still feel pressure to keep up with the Joneses)

“Those sticking to tradition and heading back Sunday will be hit with gridlock on the way home. People looking to leave immediately after the turkey is ingested will be looking at backups, too; Thanksgiving-night traffic sees a bump post-dinnertime,” it warns.