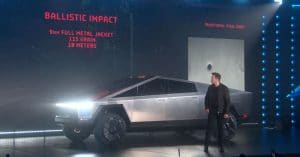 Many of Tesla’s designs have been polarizing, but none more so than the Cybertruck. However, 200K have placed pre-orders for the new truck.

Tesla Inc. CEO Elon Musk watch shares of the company drop like a stone in trading after he rolled out the uniquely designed Cybertruck last Thursday.

Initial reaction to the wedged-shaped truck was not positive; however, ever the salesman, Musk has been hyping the new machine since it debuted. The result has been more than 200,000 orders for the new truck since Thursday night.

Additionally, the company’s stock has risen 4% on Monday on the news and people have had time to digest the new truck. Shares of Tesla were last up 1% at $336.34 after touching a high of $344.57.

What is universally accepted is that Tesla needed to do something bold to separate itself from the pack of top-selling fossil fuel-powered trucks as well as the battery-electric pickups that have already been shown as well as those to come.

Musk has provided some running insights about the early pre-orders of Cybertruck. With three-quarters of the 200K orders placed, the pre-orders have been looking to upgrade in the power department from the $39,900 entry-level model. He noted that the orders were “42% choosing dual, 41% tri & 17% single motor.”

The truck managed to show off its power during the unveiling, winning a tug-of-war with a Ford F-150, pulling the truck — uphill. The video elicited plenty of ooohs and aaahhhs during the debut. He also took to Twitter to drive the point home. “Better truck than an F-150, faster than a Porsche 911,” he tweeted.

Although the pre-order numbers are impressive, although they bear closer examination.

The EV maker took more than 300,000 pre-orders for the Model 3 when it was unveiled a few years back. On top of that, the deposit required was $1,000 compared with the mere $100 needed to pre-order the truck and it’s fully refundable if you change your mind. 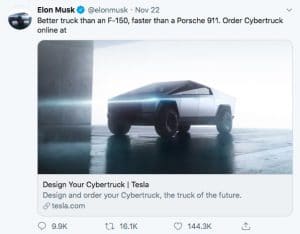 Tesla fan boys aside, the truck has attracted some supporters. However, one person expressing their admiration for the new truck has likely made Musk’s heart skip a beat like no other: Syd Mead.

Mead, the artistic director behind popular sci-fi movie Blade Runner, said in an emailed statement to Business Insider that Cybertruck “has completely changed the vocabulary of the personal truck market design.” Musk repeatedly noted in the lead-up to Cybertruck’s debut that the design was inspired by Blade Runner. Mead also called the futuristic-looking design “stylistically breathtaking.”

Though the debut showed off an electric ATV that docked (and charged) in the back of Cybertruck, it appears the pickup is going to be it for the future. “Cybertruck is our last product unveil for a while, but there will be some (mostly) unexpected technology announcements next year,” he said.