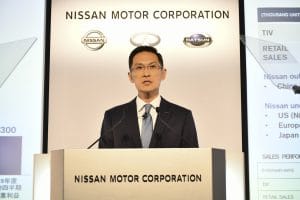 The automaker’s operating profits fell to 30 billion yen, or $275.3 million, from 101 billion yen. The severe drop comes on a much smaller slide in revenue, which fell 6.6%. The company also cut its full-year forecast to an 11-year low, citing a strong yen and falling sales for the revision.

That compared with a mean forecast of 47.48 billion yen from nine analyst estimates compiled by Refinitiv, according to Reuters. Nissan announced an interim dividend of 10 yen per share, down from 28.50 yen a year ago.

The company’s global vehicle sales fell 7.5% to 1.27 million in the quarter. Sales in China, its biggest market, fell 2.5%, while those in the United States fell 4.5%. 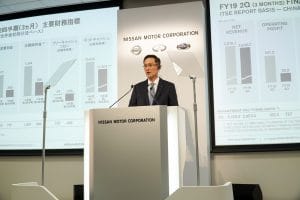 Nissan’s Ma explained the company’s full-year results will be hurt by slow sales in North America.

“Our sales in China outpaced the market, but sales in other key regions, including the U.S., Europe, and Japan underperformed,” Stephen Ma, who will become chief financial officer next month, told reporters.

Nissan shares, down 19% this year, closed up 1% at 714.5 yen before the results announcement, Reuters reported. The company’s revised guidance is a result, in part, of the sluggish sales in Nissan’s largest market, North America, as well as in China.

“We are revisiting all our assumptions, and as you can see that is why we revised down our forecast for sales volume for the full year,” Ma said.

(These Nissan, Infiniti models won’t be back for the 2020 model-year.)

As a result, Nissan cut its forecast for global retail sales to 5.2 million vehicles, down from a previous forecast for 5.5 million, bracing for its worst annual sales in six years. Additionally, the company sliced its full-year operating profit forecast by 35% to 150 billion yen, which would be its worst full-year performance in 11 years.

The company is just now sorting out much of the turmoil surrounding the ouster of former chairman Carlos Ghosn. In addition to Ma taking over as the new CFO, the executive team has undergone a significant makeover in recent weeks.

The 53-year-old Makoto Uchida had headed Nissan operations in China.

Makoto Uchida, who headed up its China business, was named chief executive officer. The automaker will hold an extraordinary shareholders meeting on Feb. 18, 2020, to vote on a proposal for Uchida and other members of the new executive team to become company directors.

(Nissan hopes to minimize impact of Brexit. Click Here to learn how.)

Nissan is implementing a global recovery plan under which it will axe nearly one-tenth of its workforce and cut global vehicle production by 10% through 2023 to rein in costs which it has said ballooned when Ghosn was CEO, Reuters reported.