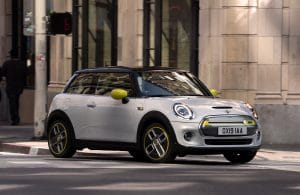 The small but mighty will be heard during next week’s Automobility LA as Mini will take the covers off its third-gen John Cooper Works GP and its all-new Mini Cooper SE battery-electric model.

The JCW GP, Mini’s fastest model, is making its world premiere while the new SE electric model is enjoying its North American debut. The EV made its world premiere this summer by pulling a jumbo jet behind it, showing off all that instant torque.

The iconic brand has been working to make sure it’s meeting the demand for a battery-electric model, it’s also been keeping the pedal to the metal, so to speak, on its sporty models.

Earlier this year, Mini expanded its John Cooper Works line-up through the newly updated JCW Clubman and JCW Countryman, which were the most powerful Minis unleashed in 60 years. However, the new John Cooper Works GP uses the same turbocharged four cylinder putting out 301 horsepower. 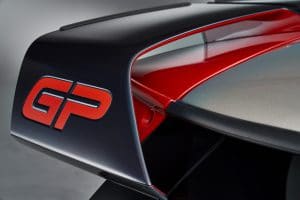 Mini is offering only a glimpse at the third-generation John Cooper Works GP.

Since its smaller and lighter, it will be the fastest Mini ever produced. The company hasn’t released performance numbers.

The JCW GP expected to arrive midyear 2020 with a price take of $44,900, plus an $850 destination and handling fee. While the speed machine is always exciting, the new battery-electric model is likely to attract even more attention.

“Automobility LA and the Los Angeles International Auto Show are the perfect venue to showcase the newest products in our line-up, which are the bookends of the brand focused on electric mobility and performance,” said Michael Peyton, vice president, Mini of the Americas.

“The state of California and Los Angeles are key regions for our business and we expect these two vehicles in particular to be very popular with consumers who want fun, whether they’re looking for electrification or high performance.” 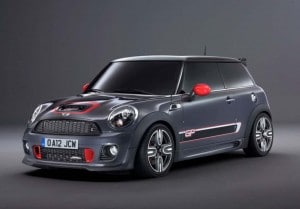 This is the first-gen model of the fastest Mini in the company’s line-up.

Using the latest European WLTP cycle, the SE is expected to deliver 235 to 270 kilometers per charge, or 146 to 168 miles. Mini Cooper SE will actually deliver something around 150 miles per charge using U.S. ratings – at most. That’s the current limit for the BMW i3 which was updated for the 2019 model-year from a previous 115 miles range.

The hatchback is powered by a single electric motor driving the front axle. It produces 184 horsepower and 199 pound-feet of torque. A news release from the British marque says the all-electric SE will hit 100 kmh, or 62 mph, in 7.3 seconds, a tenth of a second quicker than the Cooper, but nearly a full second slower than the Cooper S, so buyers won’t be in for the sort of aggressive launches that some of the newer BEVs are delivering.

The new Mini Cooper SE will go on sale early March 2020 at dealers across the U.S. at a Manufacturer’s Suggested Retail Price of $29,900 plus an $850 Destination & Handling fee. The Mini Cooper SE is expected to cost the buyer as low as $17,900 with federal tax credits and state electric vehicle tax credits in some states.