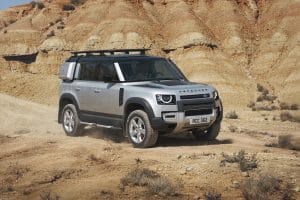 After a 22-year absence, the Land Rover Defender celebrated its return to the U.S. at the L.A. Auto Show.

This story has been updated with pricing information.

Jaguar Land Rover brought the 2020 Land Rover Defender to Los Angeles for its North American debut ahead of its launch in the U.S. market next spring.

Everything about the new Defender’s design is aimed at bestowing the vehicle with a sense of what designers call quiet confidence from its purposeful stance to its clean surfaces, the designers from the Land Rover Studio noted.

The vehicle also looks tough and durable and as well as highly functional and while the Defender’s silhouette is easily recognizable as the exterior design carries over 70 years of Land Rover tradition. The short overhands at the front and rear serve to improve the vehicle’s off-road geometry and capability.

(Land Rover Defender officially makes its return to the U.S.)

Land Rover executives are also saying they are confident the Defender can take its owners anywhere. The vehicle’s capabilities are strengthened by the vehicle’s overall geometry and the Configurable Terrain Response built into the vehicle, which allows drivers personalize their off-road system preferences. 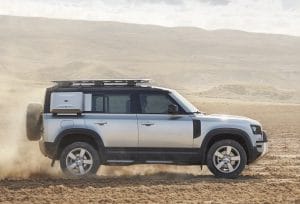 The new Defender also has 11.5-inches of ground clearance for off-road travel, which is enhanced by the vehicle’s overall geometry, including a 110-degree approach angle and a break over of up to 40 degrees. The Defender is also built with 35.4 inches of wading depth and equipped with a wade program in the terrain regulated settings that allow the driver to ford a river with confidence.

The all-terrain capabilities and all-wheel drive give the Defender sure footing both off- and on-road. All-wheel drive, a two-speed transfer case, electronic active differential and a larger tire family make the Defender Land Rover’s most capable vehicle, according to company engineers.

An additional set of lower gears can prove invaluable in challenging conditions such as steep inclines or declines, off-road driving or when towing.

The Defender offers a refined 2.0-liter four-cylinder turbocharged Ingenium engine. The engine is supported by a mild hybrid system that helps reduce fuel consumption and carbon dioxide emissions, the P400 MHEV engine harvests and stores energy normally lost during deceleration and redeploys it. 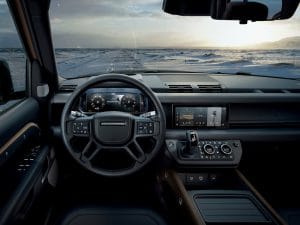 While it may be the most capable Defender ever, it’s also got a slew of new technology.

The round headlights on the Defender are also easily recognizable and the interior the Defender is equipped with an alpine light that can illuminate the interior completely. Equipped for 21st century adventures, Land Rover’s most intuitive technologies to date ensure convenience, connectivity and visibility from the driver’s seat.

Jaguar Land Rover also will make it easier for owners to customize their Defenders for their specific purposes with special accessory packages such as the “Adventure Package,” which includes a Portable Rinse System with a 1.7 gallon (6.5-liter) pressurized water reservoir, trunk-mounted Integrated Air Compressor and Exterior Side-mounted Gear Carrier. A practical 6.3-gallon seat backpack, which you can take with you when you leave the vehicle, completes the interior.

It also features a Country Pack, Explorer Pack and Urban Pack as well. The new Defender, after being absent from the U.S. for several years, will return in in the second half of 2020.