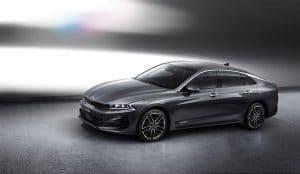 The new Kia K5 may be targeted at the Korean market but it presages the 2021 Optima bound for the U.S.

If you live in the U.S., chances are you might not even give a second glance at the new pics of the K5 sedan which, Kia says, will be targeted specifically at the Korean market.

But you might want to take a closer look, after all. Turns out what you see will likely be very, very close to what we’ll be getting in North America in the form of the 2021 Kia Optima.

Perhaps that was no surprise, in the first place, as the overall look is familiar, though the update of the midsize sedan does adopt a more stylish and aggressive look, overall. We’ll have to wait a bit, however, to get a look at the 2021 Optima’s interior and get hands on the car’s specifications. We wouldn’t be surprised, however, to see a hybrid version, much like what sibling brand Hyundai has done with the latest makeover of the Sonata.

(Kia’s Futuron Concept is an EV the Jetsons could love.)

The most immediate signal you’re looking at a Kia comes in the form of the brand’s distinctive tiger-nose grille. In keeping with that theme, the 2021 K5 gets a more “imposing new ‘Tiger Nose Evolution’, a wide, three-dimensional design which integrates the grille and headlamps more organically than previous iterations of the K5. The texture of the grille is modeled on the texture of shark skin which has powerful and sporty image,” the automaker says in a release accompanying these images. 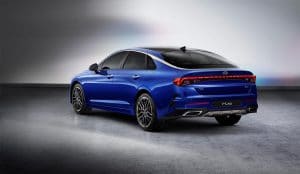 Like the new Hyundai Sonata, the K5-cum-Optima should appear with powertrain options including a new hybrid

The nose of the sedan is more upright and blunt, an approach we’re noticing a number of automakers starting to adopt, apparently to give their products a more SUV-like face. But while some new sedans are growing taller, the new K5 sits almost an inch lower than the outgoing model – while adding about two inches to its overall length. It’s also a slight bit wider.

The hood, meanwhile, is more deeply contoured than in previous iterations of the Optima, another design trick meant to accentuate the sense of power and sportiness. There’s a subtle Coke-bottle element to the silhouette of the ’21 Optima, its body narrowing slightly between the two wheel arches. A distinctive crease, meanwhile, dashes across the length of the K5’s body.

The sedan’s fastback rear pillars and high rear quarter-windows appear to be connecting the new Optima with the aggressive Kia Stinger sport sedan.

From the rear, new combo taillamps ride just below a subtle rear wing. 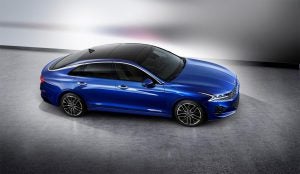 The Optima gets a new version of Kia’s trademark tiger-nose grille.

In its Korean incarnation, the sedan will be offered with 16-, 17-, 18- and 19-inch machine-cut aluminum alloy wheels.

(Click Here for a review of the latest-gen Kia K900 luxury sedan.)

How much of the new design will carry over to the U.S. model is uncertain but the overall look should be quite similar.

From a powertrain perspective, Kia will be sticking with its all-four approach, and is expected to share its options with the 2020 Hyundai Sonata. That includes a base, naturally aspirated 2.5-liter I-4 that, in the Hyundai, makes 191 horsepower. There’s also a turbo-four displacing 1.6 liters and making 180 hp. Both will likely retain the eight-speed automatic for the U.S. market.

The bigger of the two Korea carmakers is expected to reveal the next-gen version of its Sonata Hybrid early in 2020 and there is the possibility Kia could offer more than one HEV option for Optima. Both Sonata and Optima, meanwhile, are rumored to be in line for a more powerful 2.0-liter turbo package.

There’ve been some reports of the 2021 Kia Optima being tested out in the Mojave Desert. So, we’d be surprised if Kia doesn’t offer up a look at the U.S.-bound Optima in the next couple months, with some sources suggesting it will take a bow as early as next week’s Los Angeles Auto Show.