Kia Futuron: An EV Design the Jetsons Would Love

“In the best traditions of UFO and flying saucer design." 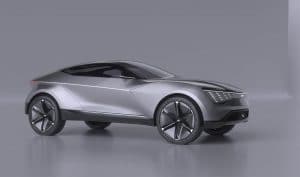 The Kia Futuron’s name is a portmanteau of “Future” and “on,” the automaker explains.

The Kia Futuron has the sort of name you might have expected to see on a concept car at the 1964 New York World’s Fair. And with the automaker suggesting it was designed “in the best traditions of UFO and flying saucer design,” Futuron easily could have been lifted out of the old cartoon series, the Jetsons, or, perhaps, that retro-futuristic, Bladerunner.

But the automaker is very much pointing ahead with the new concept vehicle, its name “a portmanteau of ‘future’ and ‘on’, hinting at the switched-on, electric nature of future SUV designs from the brand,” Kia explains.

We’ve already seen a handle of electrified offerings from the Korean carmaker, notably the Niro. But, like so many of its competitors, Kia is anticipating a time when battery-cars, all-electric models in particular, come to dominate its line-up.

The latest show car offers a striking contrast to the more wagon-like Imagine-by-Kia concept that was unveiled at the Geneva Motor Show last winter. 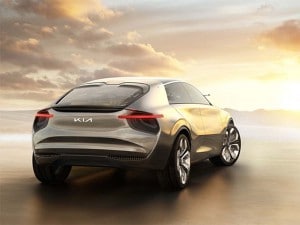 The Imagine by Kia concept debuted in Geneva last winter.

Like pretty much any new battery-electric vehicle, or BEV, the Futuron starts out with a skateboard-like platform which mounts batteries and motors under the floorboard. From a center-of-gravity standpoint that should help offset the rather significant amount of ground clearance the new concept vehicle features.

Kia is billing Futuron as “a sports car on an SUV platform,” though it just as easily could refer to the concept as a spaceship on wheels. It features a relatively aggressive, upright grille, its windshield is steeply raked and arcs into an aggressive, coupe-like roofline that peaks at just 1550 millimeters, or about 61 inches off the ground. Occupants would be able to see in virtually every direction but down, meanwhile, thanks to the addition of an all-glass roof.

To add to its spaceship-like qualities, the concept’s broad take on the familiar Kia tiger nose grille lights up while driving. As for lighting, Futuron adopts what Kia calls, :an innovative ‘Star Cloud’ design which gives the car a dazzling new night-time identity. The concept’s Star Cloud lighting not only highlights a new design form for the front of the car, but also embodies a new lighting concept for Kia, taking inspiration from nebulae in the night sky to create a geometric patchwork of matrix LED lighting.”

(Click Here for a review of the latest-gen Kia K900 luxury sedan.) 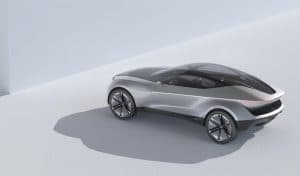 The Futuron measures 4850 mm, or 190.9 inches, nose-to-tail — slotting pretty much dead center between the Audi e-tron and Jaguar I-Pace – with a 3,000 mm, or 118-inch wheelbase. Since there’s no engine up front, Kia’s product development team nabbed some of that space for the interior, meaning plenty of room for passengers front and back. In fact, the forward buckets can recline to a fully flat position providing a first-class airline seat level of comfort.

The ability to function more like a lounge than a typical passenger car cabin is aided by the Futuron’s Level 4 autonomous drive system – which relies on sensors built into that all-glass roof. That still-under-development technology would allow a vehicle to operate completely driverlessly, albeit in “geo-fenced” areas.

From a drivetrain perspective, Kia says Futuron will feature a high-capacity lithium-ion battery pack and, considering the size of the vehicle and current trends in battery development, one could readily imagine the car delivering at least 300 miles of range.

(Fisker dips its toes in the water with a first look at the new all-electric Ocean sport-sedan.) 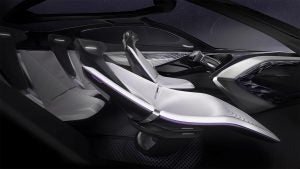 From the performance perspective, Kia suggests Futuron would live up to the promise of its design. While the automaker isn’t releasing specific details, it does note that the concept vehicle features four separate electric motors, one driving each wheel. That would permit an extremely flexible all-wheel-drive system, as well as electric torque vectoring, where outer wheels receive greater levels of power to enhance cornering capabilities.

How close to production are the Imagine and Futuron concepts? Certainly, there are some features, such as the cartoonishly large wheels, that wouldn’t make it to the assembly line. But a number of the design cues from the two are likely to carry over into showroom models, Kia suggests.

Kia isn’t the only automaker opting to push the design envelope with future BEVs. On Monday, Infiniti confirmed it is preparing to roll out three edgy electric vehicles based on its recent Q, Qs and QX Inspiration concepts.

(For more on Infiniti’s plans to go electric, Click Here.)