Hyundai Vision T Offers a Glimpse of the Future 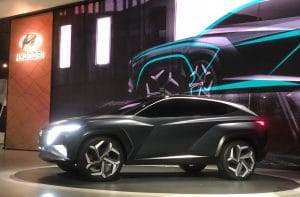 There’s a strikingly futuristic quality to the Hyundai Vision T concept debuting at the Los Angeles Auto Show this week, especially when its coming directly at you. The crossover show car offsets its slim headlamps with a cascading sequence of running lamps framing what the Korean carmaker describes as a “parametric” grille.

A walkaround reveals that the most recent concept to emerge from the Hyundai Design Center is teasing the carmaker’s latest evolution in styling, something he has dubbed “Sensuous Sportiness. But you’re likely also to get a sense of something familiar. And while Hyundai isn’t ready to publicly confirm it, the Vision T offers a strong hint of the next-generation Tucson crossover.

The fact that the concept version is equipped with a plug-in hybrid drivetrain provides yet another hint of what’s coming, especially as Hyundai officials earlier this month announced plans to nearly triple the number of “eco-friendly” vehicles currently in its line-up during the next several years.

The unusual shape of the grille on the Hyundai Vision T concept, it turns out, is a case in point. It isn’t entirely for show. Electric drivetrains need relatively little airflow, at least compared to a conventional internal combustion engine. That’s why Tesla eliminated grilles on its latest models – and why Hyundai’s Kona EV has replaced the grille on the gas version with a sealed panel. Grilles impact aerodynamics, reducing range. 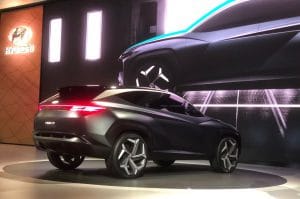 The most recent concept to emerge from the Hyundai Design Center is teasing the carmaker’s latest evolution in styling.

But, with a plug-in hybrid, you still need that extra bit of airflow, at least when the IC engine fires up. Some manufacturers have adopted utilitarian “grille shutters,” opening them up only when more air is needed. But Hyundai has figured out that it can turn basic functionality into part of the design. So, those are actually what the carmaker calls “parametric air shutters.” Each individual cell in the distinctive design can “move in a prescribed sequence” which, in turn, not only proves functional but adds a “dynamic forward demeanor.”

Even before you check out the technical details of the Hyundai Vision T, however, its design is likely to grab your attention. Hyundai has good reason to push the envelope. It went from being a bargain-priced brand to one attracting serious, mainstream attention with the striking version of the midsize Sonata sedan it debuted several generations ago. Considering the shift in the global new vehicle market – and particularly in the U.S. – it recognizes that it has to pursue a similar path with its rapidly expanding SUV line-up.

The current mix, starting with the Santa Fe and Tucson models, are reasonably handsome, but the Vision T design suggests the brand wants to push things a big step beyond.

The matte black Hyundai Vision T concept, at 181.5 inches in length, sits almost dead center between the current Tucson and Santa Fe models. It’s 79.3 inches in width and has a height of 67.1 inches, with a 110.4-inch wheelbase. 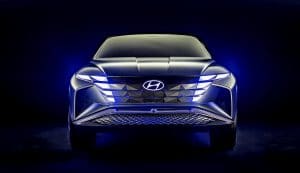 The unusual shape of the nose of the Vision T Concept isn’t entirely for show. It has a functional side s wee

As is the case with so many concept vehicles, and particularly those using battery propulsion, Vision T uses a variety of accent lights, as well as more functional lighting. The charging port, for example, glows blue when plugged in, and a circular light cluster indicates charging progress.

Hyundai has been vague about plans for the next-generation Tucson, the SUV having gotten a mid-cycle update barely a year ago. But it’s widely expected we’ll see a more direct prototype, possibly even the production model, during the first half of 2020.

One key question is what sort of powertrain options will be offered. “It wouldn’t surprise” if there will be a plug-in hybrid in the line, said Sam Abuelsamid, principal automotive analyst with Navigant Research.