Hyundai Ioniq Electric gets big bump in both range and power. 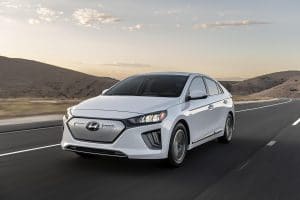 Hyundai is planning to ensure it is keeping up with the alternative fuel needs of buyers with an expanded Ioniq line-up, like the battery-electric version.

Throughout the course of the coming decade, ever more stringent emissions and fuel economy regulations are expected to “encourage” auto manufacturers to adopt a range of new powertrain technologies, anything from “mild” hybrids to full-electric, as well as hydrogen fuel-cells. The question the industry is struggling to answer is which works best.

And manufacturers aren’t alone. Motorists also have to try to figure out the best option reflecting their own tastes and needs – and budgets.

Hyundai is trying to cover all the bases. It recently launched its next-generation hydrogen car, the Nexo. And, in a move to give buyers an easy way to go green – or at least greener – it also has the Ioniq family which is available in three different versions, hybrid, plug-in and all-electric. And, for 2020, the Ioniq is getting a bit of a makeover that should make all three options yet more appealing.

The midcycle update, which will reach showrooms next month, brings with it a number of improvements, both to interior and exterior design, as well to the three powertrains offered in the Ioniq mix. 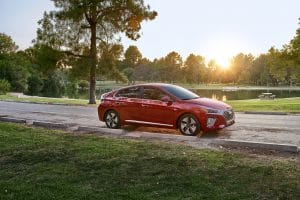 Hyundai offers the Ioniq in three different powertrains, such as the hybrid model.

To start with, the compact models all feature new grilles, headlights and bumpers, up front, with new wheels, taillights and rear bumpers, as well.

Motorists should find the 2020 update offering a more spacious feel inside, thanks to the lowered instrument panel. Sitting atop the IP is a new, 7-inch tablet-style touchscreen. For those who opt for onboard navigation, the screen grows to 10.25 inches.

The most sophisticated version of the Ioniq – at least from a powertrain perspective, is the all-electric model. It falls well short of the long-range models that are just starting to come to market – including Hyundai’s own Kona EV. But, for those who want a reasonably affordable alternative that can be used primarily for errands and commuting, the Ioniq Electric is a viable option. Actually, it becomes even more viable for 2020, as range jumps a full 46 miles, to 170 miles per charge.

That’s thanks to a battery that increases in capacity from 28 to 38 kilowatt-hours, It can plug into standard home chargers, or Level 3 public quick chargers, the latter allowing it to add 100 more miles in 54 minutes.

The 2020 Hyundai Ioniq Electric also gets a bump in power, as it jumps from 118 to 134 horsepower with this year’s update. 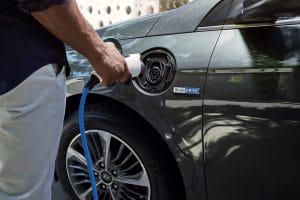 For the base Hyundai Ioniq Hybrid Blue, changes are more modest for 2020, including the exterior and interior tweaks, while it also gets new safety technology such as Lane Keeping Assist and High Beam Assist with the Hyundai SmartSense package.

Then there’s the middle-ground model. For some buyers, the ability to drive solely on battery power might be desirable, but their driving needs can push beyond what an all-electric model can deliver on a range basis. That might mean taking longer trips or simply not having regular access to charging.

That’s where the Ioniq PHEV comes in. Like other plug-in hybrids, it offers enough EV range to handle chores and, for many folks, daily commuting. But a gas engine is always at the ready, kicking in when the battery runs down.

Like the rest of the Ioniq line, the PHEV gets a number of interior and exterior updates, and more more technology. But its battery capacity and EV range of 29 miles per charge hold for 2020.