Green Car Awards Honor Hybrids and Diesels, But No EVs, Oh, My! 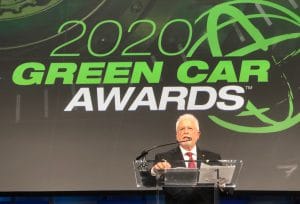 Whether due to consumer demand or increasingly stringent government mandates, there’s been a surge of new, “eco-friendly” vehicles coming to market during the past few years, and four of the best were honored Thursday morning at paired ceremonies in Los Angeles and San Antonio, Texas.

One of the key things that differentiates today’s green machines from those of years past is that aren’t focused exclusively on lowering emissions and increasing energy efficiency, said Ron Cogan, publisher of Green Car Journal, the publication behind the Green Car of the Year awards.

They “are offering greater performance,” he said, while also providing “greater levels of driving enjoyment.” And, significantly, they are doing this with a broader mix of technologies that include not only pure battery-electric, hybrid and plug-in hybrid drivetrains, but conventional gas and diesel, as well. That was reflected in the choice of this year’s winners.

Green Car of the Year

The Toyota Corolla, the best-selling passenger car in the U.S., took honors this year, beating out finalists that included the Ford Escape, Hyundai Sonata, Kia Soul and Mazda3.

Several factors contributed to the selection of the Toyota sedan, starting with its recent makeover and the addition of the first-ever Corolla hybrid package, explained Cogan. 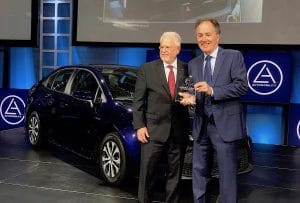 Bill Fay, right, head of Toyota operations with Ron Cogan, in front of the Corolla, the Green Car of the Year.

“Corolla just got a new color, and it’s green,” proclaimed Bill Fay, Toyota’s senior vice president of automotive operations for the U.S. “It’s the next chapter in our electrification efforts,” he added, “where we will offer electrified version of everything we sell by 2025.”

Green SUV of the Year

With utility vehicles gaining an ever-growing share of the U.S. market, this might be seen as the more significant award this year, and it saw five strong finalists vying for the trophy: the Ford Explorer Hybrid, the Honda CR-V, the Subaru Crosstrek Hybrid and two entries from Toyota, including the big Highland Hybrid and the new RAV4.

The CR-V, which also has added a hybrid package, took SUV of the Year honors, Steve Center, the brand’s U.S. sales chief, calling that “a great leap forward … honoring that commitment” the Japanese automaker has made to having two-thirds of its global sales made up on electrified vehicles by 2030.

The Car and SUV awards were announced at an event at the 2019 Los Angeles Motor Show on Thursday, but there were two additional Green Car trophies handed out at a separate event in Austin.

Green Truck of the Year

Honors went to the Fiat Chrysler truck – a noteworthy development considering the Ram 1500 also won a year ago, marking the first back-to-back win by the same product ever for the Green Car awards. 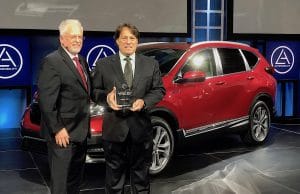 Steve Center, vice president of American Honda Auto Sales, in front of Honda CR-V, the Green SUV of the Year.

According to Cogan, what worked in the Ram 1500’s favor was the new EcoDiesel which is “more powerful but also gets better mileage, at 32 mpg,” than the earlier version. It also impressed judges that the full-size Ram is offered with two different e-torque mild hybrid systems.

Green Family Car of the Year

This first-time award reflects the need for affordable and reliable vehicles for family buyers, especially those on a budget, Cogan explained.

The mix of finalists included the Chrysler Pacifica Hybrid – which is really a PHEV – the Hyundai Venue, the Kia Niro, the Nissan Versa and the Mitsubishi Outlander PHEV. The Mitsubishi plug-in wound up snagging the award, a significant development for a struggling brand.

Throughout the years, the various Green Car of the Year awards have honored a broad spectrum of vehicles, including a number of battery-based and hydrogen fuel-cell powered offerings. One of the significant developments this year was the fact that there was only one all-electric model among the 20 finalists vying for the four awards. And, with the Kia Niro, it is offered in a variety of alternatives, the all-electric model being just one powertrain option.

Looking forward, however, the Green Car Journal’s Cogan said he expects to see pure battery-electric vehicles have a larger presence next year and beyond, if for no other reason than the fact that “we’ll see a lot of all-electric vehicles” starting to come to market.