Ford deal may be problematic for FCA. 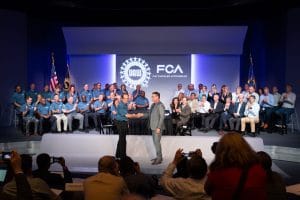 The terms fo the pattern agreement Ford agreed to may prove to be problematic for Fiat Chrysler.

Even as top executives at Fiat Chrysler Automobiles N.V. work at putting together the merger with Groupe PSA, the company’s negotiations with the United Auto Workers on a new labor contract are waiting on the outcome of the ratification vote among UAW members at Ford.

However, the pattern contracts the UAW signed with General Motors Co. and the tentative agreement with Ford contain new limits on the use of temporary workers and faster route to full pay for new employees, which could prove problematic for FCA’s negotiators during the final phase of the company’s discussion with the union when the resume in earnest in mid-November.

GM executives have tried to gloss over the limits on temporary workers in discussions with analysts, but union officials have insisted they are genuine, and the company will be forced to live up to them.

In addition, UAW officials have said every single temporary worker at Ford will become a full-time employee eventually under the terms of the tentative agreement reached last week.

Meanwhile, FCA’s blue-collar head count has more than doubled since 2011, going from 23,000 to 47,000 now, according to the Center for Automotive Research. In addition, about 10% of the workforce is considered temporary but the company is planning to add several hundred new employees in the next couple of years as it opens a new factory in Detroit.

owledged the upcoming discussions with the union could be challenging.

“The fourth quarter cash flow does include an estimate on the signing bonus that is embedded in there. What I would say is obviously each of us, each of the Big Three in Detroit are in different conditions in terms of labor workforce,” Manley said.

“I don’t want to get into too many details. I understand that now the Ford negotiations will go to vote, and we’ll be up next. For us, we’ve continued to work with the UAW during this period, and I’m hoping to be able to get to a conclusion of the negotiations and get on with building great cars in the near future, but beyond that, I don’t want to get into speculation of what may work and what may not work here,” Manley added.

As far as the combination with PSA, while the union was prepared to object to a merger with General Motors, historically the union has not objected to combining Chrysler’s industrial footprint in North America with that of a union carmaker. It raised no objections to the merger with Daimler-Benz and actually helped facilitate Chrysler’s merger with Fiat.