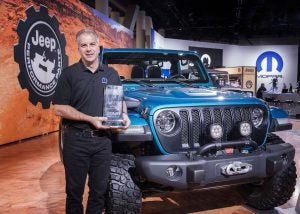 The annual SEMA meet up must be like nirvana for Fiat Chrysler’s Mopar brand, and the automaker’s specialty parts division isn’t disappointing this year bringing 14 vehicles to the show, including featuring two pickup truck concepts as well as Jeep Wrangler Rubicon concept.

The Jeep concept is particularly timely as the Jeep Wrangler continued is unprecedented and unbroken run of success in Las Vegas after being named “4×4/SUV of the Year” for the 10th straight year. The Wrangler is the only vehicle to have won an award each year since the honors began in 2010.

“Just as there are no limits when it comes to the capabilities of the Jeep Wrangler, the same could be said of the many options available to personalize the Jeep Wrangler,” said Mark Bosanac, Head of Mopar Service, Parts and Customer Care, FCA – North America.

“We are proud and honored to win ‘4×4/SUV of the Year’ award for 10 years in a row, which is a testament not only to the staying power of the Jeep Wrangler, but also to the passion and creativity of the aftermarket community, which continues to select the Jeep Wrangler as a perfect canvas for customization.” 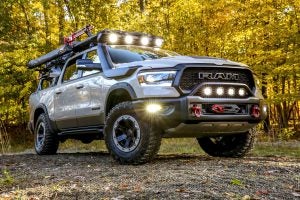 Mopar explores the adventurous world of overlanding with the Ram 1500 Rebel OTG concept for the 2019 SEMA Show.

The Jeep Wrangler Rubicon on display comes with concept tube door mirrors and door skins, a one-piece stamped steel front bumper with integrated fog lamps, tow hooks on the top and “D-ring” attachments at the bottom. The bumper is a Mopar production part and currently available to consumers. The vehicle is also equipped with a two-inch lift kit, Mopar cold-air intake and Mopar Warn winch kit to showcase some of the customization options that are only possible in the Jeep Wrangler.

“These vehicles showcase how Mopar is constantly expanding and exploring new ideas to meet the needs and fuel the imagination of our passionate fans,” Bosanac said. “Whether it’s overlanding in remote locations or reimagining an alternative classic design history, Mopar has its customers covered.”

In addition to the Rubicon concept, Mopar is showing the Ram 1500 Rebel OTG (Off The Grid), an overlanding-themed vehicle concept, and the Mopar Lowliner Concept, a reimagined 1968 Dodge D200-series pickup, are customized with a unique combination of Mopar production and prototype parts and accessories.

The Rebel OTG is Mopar’s take on how best to take part in the “overlanding” concept that has become popular in recent years. The vehicle draws upon the rugged capabilities of the production Ram 1500 Rebel, improving all-terrain capability via Mopar’s concept two-inch lift kit, beadlock wheels and 35-inch Goodyear tires. 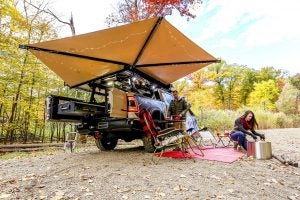 The Rebel OTG concept is based on the Ram 1500 Rebel. It is equipped with a tent, canopy, solar panel and self-contained cooking and refrigeration units.

The concept also includes other Mopar concept accessories, like a front bumper with integrated winch, a larger grille with flow-through R-A-M badging and a functional snorkel air intake to improve off-road capability and performance. Front- and rear-wheel flares and step assist rock rails have been installed to protect the vehicle while traversing rough terrain. A concept rear bumper, adapted from the Ram 1500 Tradesman, improves the departure angle of the truck by relocating the exhaust.

A bed rack system fits atop the truck bed, carrying a collapsible rooftop tent, which can be accessed via a stowable ladder. Meanwhile the truck bed has a retractable battery-powered cooler and kitchen unit with a gas-powered stove and sink with an on-board water system, plus an additional rack structure is mounted above the cab for more storage space for tools and equipment.

A solar panel set and a backup power supply eliminates the need for a gas-powered generator, freeing cargo capacity. A concept hide-away bed step in the rear makes loading and unloading easier. The concept truck is also equipped with an on-board air compressor in the bed cargo area. The truck also features led-style lighting designed to light up the night to make your campsite easier to enjoy in the dark. 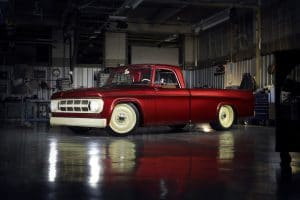 The Mopar Lowliner is a rescued 1959 Dodge pickup, saved in time for SEMA.

While the Rebel OTG is ready to go anywhere, the Mopar Lowliner is set for cruising. Mopar designers rescued a 1968 Dodge D200-series heavy-duty pickup truck to transform it into the Candied Delmonico Red and Dairy Cream Mopar Lowliner Concept.

Designers fully boxed the original C-channel frame of the rear-wheel-drive truck, substantially lowered the ride height and lengthened the wheelbase for a more dramatic stance. They also made a custom, power-tilt front end to showcase the legendary 5.9-liter Cummins diesel engine, which is mated to a six-speed manual transmission with a floor-mounted shifter.

The front axle of the Lowliner is moved three inches forward on the frame, pushing the front wheels closer to the front corners of the truck to achieve better proportions. A custom air suspension is added to the front and rear axle with three modes: low, driving height and driving height plus.

Custom designed wheels with a “smoothie” look mimic stamped steel wheels of the late ‘60s. In the front, the Lowliner wheels are 22 inches by 9.5 inches and ride on 285/35-22 tires. The rear wheels measure 22 inches by 11 inches with 325/35-22 tires for a more muscular appearance.

Inside the Lowliner, the original bench seat is covered in an orange-amber Blazing Saddle Tan leather with a distressed look. The headliner is also leather with a Mopar Omega M logo stitched into it. Custom-tailored tan carpet adorns the floor.

The original 1968 steering wheel has been retained with the original Dodge fratzog emblem on the horn ring cap. Instrumentation is reworked with seven custom Mopar gauges mounted to a unique “engine turned” aluminum panel. The floor-mounted shifter is topped by translucent metal-flake shift ball with the Cummins logo, reinforcing the retro appearance of the truck.