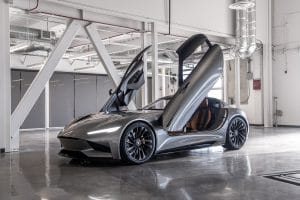 The Karma SC2 Concept serves as a “signpost to our future,” said the automaker’s CEO.

It’s not quite “instant karma,” but L.A. Auto Show media got a double dose of Karma on Tuesday as the California-based automaker officially unveiled both the latest version of its Revero plug-in hybrid and the new SC2 Concept.

The Karma Revero, the reborn version of the old Fisker Karma – to inject a dose of confusion into the story – already has undergone some significant changes from the battery sports sedan that first debuted in 2012. In its latest (re)incarnation it gets its fastest powertrain package yet.

The Karma SC2, meanwhile, adds a top and a few other tweaks to the SC1 show car that was unveiled last summer. Think of it as “a signpost to our future as a technology-driven brand,” said Karma Automotive CEO Lance Zhou. “More than that, it previews our future design language, and is a thought-provoking expression of Karma’s future Intellectual Property and product offerings,”

For those who haven’t followed the travails of what began as Fisker Automotive, the company launched by Danish designer Henrik Fisker went belly-up seven years ago. But the remnants of that company – most notably its striking PHEV sport-sedan, then known as the Karma – were acquired by China’s Wanxiang Group. In karmic fashion, they were reincarnated as Karma Automotive. And the PHEV was renamed Revero. 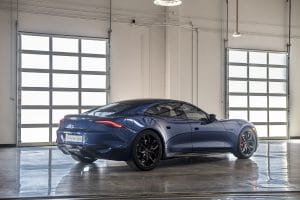 With the GTS, Karma launches the fastest version of its plug-in Revero yet.

The design has proved surprisingly robust, undergoing only some relatively modest revisions – Fisker’s original moustache grille replaced with something a little less quirky, for one thing.

Karma, meanwhile, followed up on the bankrupt company’s original plans and recently upgraded Revero’s lackluster, General Motors-derived inline-four range-extending gas engine with a more perky, three-cylinder alternative from BMW. Now, with the Revero GTS, it is taking things to the level fans had long hoped for, punching up performance to a level the design would seem to deserve.

The dual electric motors on the GTS now generate 536 horsepower, enough to hit 60, Karma claims, in “under four seconds,” with a top speed of 125 mph. Other enhancements include drivetrain-controlled torque vectoring to improve performance and stability.

While the Karma Revero GTS is aimed to enhance the company’s minimal line-up in the short-term, the SC2 Concept – like the earlier SC1 – gives us insight into what could be added in the not-too-distant future. And that will see the California-based company expand into the pure battery-electric vehicle segment. 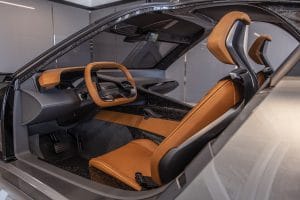 Inside the Karma SC2 Concept.

The futuristic show car also uses twin electric motors, one on each axle, pumping out an impressive 1,100 horsepower combined. But it’s the torque numbers that will likely have you re-read this paragraph several times over, the automaker claiming the SC2 will make 10,500 pound-feet of instant-on torque. And yes, that really does say “ten thousand five hundred.” That will be enough, it claims, to launch the BEV concept from 0 to 60 in just 1.9 seconds. That said, its battery pack is designed to yield 350 miles of range when driven less aggressively,

Heading into the L.A. Auto Show, the Chinese-owned Karma had been hinting it would also reveal some new business strategies. Among other things, CEO Zhou said the company’s plans center around five “intelligent technologies,” listed in a news release as:

“These ecosystems will be where we plant our competitive flag to achieve our business goals and establish our long-term value proposition,” Zhou explained. “We will use partnerships with startups, academia, companies, service providers, and developers who can benefit from Karma’s five technology ecosystems.”

One of the specific plans the executive revealed will see Karma launch a “proof of concept” in which it will convert existing vehicles to use variations of the Karma’s EREV – or extended-range electric vehicle – a skateboard-like platform. Exactly how that will work, well, we’ll apparently have to wait for more details.