Cybertruck’s Design Won’t be Only Issue for Tesla; GM E-Truck Coming Out at Same Time

Barra reveals electric truck will be ready in late 2021. 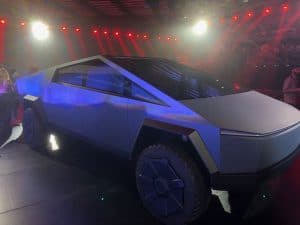 Not only will Tesla have to deal with detractors about the design of the new Cybertruck when it begins production sometime in late summer next year, it will have what’s expected to be a more conventional-looking competitor to deal with too: General Motors.

GM CEO Mary Barra told attendees at an investor conference in New York that it will have its own battery-electric pickup ready for the public in the fourth quarter of 2021, and it’ll be ready to compete.

“General Motors understands truck buyers and … people who are new coming into the truck market,” Barra said. “It will be a very capable truck, I’m pretty excited about it.”

According to Reuters, Barra was light on any other details about the truck.

GM Chairman and CEO Mary Barra said the company will have its first battery-electric truck ready about the same time as Tesla’s Cybertruck.

Prior to Barra’s little tease of information about the truck, the primary bit of detail available was that the company plans to build a group of high-end battery-electric pickups and sport-utilities at the Detroit-Hamtramck plant.

The plant was rumored to be set to be closed, but it became part of GM’s $11 billion in new U.S. investment committed to as part of the new four-year contract with the UAW. There is plenty of speculation that the EV line-up will take on a revived Hummer name.

GM acquired the rights from AM General to make Hummer trucks for civilian applications in 1998. After several attempts to sell the brand in 2009, it basically was just folded up in 2010 by the company.

Ford recently rolled out a battery-electric F-150, which towed a train. GM agreed to produce an electric pickup in a Detroit plant as part of its recently agreed-to contract with the UAW.

Additionally, Rivian has rolled out its full-size all-electric pickup and Bollinger is prepping its pickup as well. However, the EV maker may be able to carve out a profitable slice of that pie. All of these options remind that even minor success in the segment could mean major cash for the bottom line.

“(E)ven if the Tesla truck doesn’t win over the usual F-150 crowd, it doesn’t necessarily have to,” said Jessica Caldwell, Edmunds Executive Director of Insights.

“Trucks are experiencing a transformation similar to what happened with SUVs, attracting new buyers who rarely use the utility but appreciate the space and creature comforts trucks offer. The truck segment has the fewest number of models, leaving plenty of room for growth and for automakers to carve out new niches.”