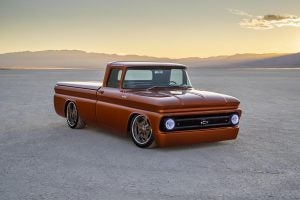 Chevrolet’s E-10 Concept hints at what the bowtie brand might be working up for the future of performance in an electrified world.

Chevrolet is looking into its past and coming up with a hint of what could be the future of hot-rodding with the all-electric E-10 Concept truck.

The battery-powered hot rod makes its debut at the annual SEMA Show in Las Vegas today, an event that normally carries a heavy whiff of high-octane gasoline. While there are plenty of classic performance cars and concepts on display at Sin City’s convention center, the E-10 takes a very different approach to muscling up – and suggests that even if the automotive world does go electric, performance cars aren’t going to vanish.

Chevy isn’t the only automaker talking battery power at SEMA, however. Several other automakers are also plugging in this year, with rumors suggesting Ford may have something in the works, as well.

The Chevrolet E-10 Concept started out as a classic, 1962 C-10 pickup. But the truck’s original gasoline drivetrain has been replaced by not one, but two, electric powertrains borrowed from the Chevy Bolt EV, something the automaker is dubbing a double-stack eCrate motor. The system punches power to a conventional SuperMatic 4L75-E automatic transmission which, in turn, drives the E-10’s rear axle. 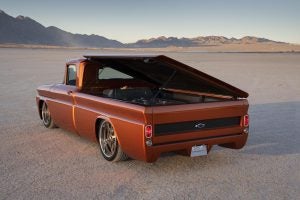 The E-10 stuffs about 60 kWh worth of lithium-ion batteries under its rear tonneau.

“The Chevrolet E-10 electrified Connect & Cruise concept system reimagines the performance crate engine for hot rodders,” explains Jim Campbell, the bowtie brand’s vice president of Performance and Motorsports. “As General Motors continues to work toward our vision of a zero-emissions world, concepts such as this help us get there, while still supporting the enthusiasts who love to drive vintage vehicles.”

All told, the lithium-ion batteries under the truck bed’s tonneau cover supplies about 60 kilowatt-hours of usable energy. In the production Chevy Bolt that’s enough to go about 250 miles per charge. But range isn’t what Chevy is going for with the E-10 project vehicle.

The eCrate motor pack develops “an estimated 450 horsepower to the rear wheels,” according to Chevy, and that should launch the truck, despite the added battery mass, from 0 to 60 in a reasonable 5 seconds. More impressively, Chevrolet estimates it can shoot through the traps after a quarter-mile run “in the high 13-second range.” 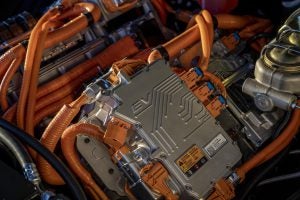 Chevy is dropping hints a version of the e-Crate motor could be offered in its performance catalog in the not-too-distant future.

“We designed this system to deliver both power and range, said Russ O’Blenes, the director of Performance Variants, for the Parts & Motorsports unit at Chevy.

For now, General Motors’ mainstream brand is referring to the eCrate package, like the E-10 itself, as a concept. But with a growing number of performance fans, including those into drag racing, looking at what electric drive can deliver, there’s a clear sense GM is giving the project serious consideration.

“The exciting part is that we’re just getting started,” said O’Blenes. “Just as we have done over the years with our performance crate engines, we will continue to refine and improve electric propulsion Connect & Cruise concept systems. Our goal is to provide greater power with greater range, suiting the different needs and priorities of all types of enthusiasts. In this case, we will use higher current and voltage-capable inverters, batteries and related components rather than carburetors and cylinder heads.”

One downside of electric propulsion – for motorsports fans, anyway, is that the technology operates all but silently. Chevy addressed that with the E-10. The project truck has three speakers and a digital audio head that can “simulate an induction sound in the front and two banks of a V8 engine.” Of course, it could just as well make any sound it wants. A Brabham-tuned Smart EV concept of a few years back could emulate both a Mercedes-AMG race car as well as the sound of the flying car from the animated sci-fi series, the Jetsons.

The E-10 Concept, and other production battery-cars to come, borrow heavily from the Chevrolet Bolt EV.

Beyond the electric drive system, Chevy has made only modest tweaks to the classic ’62 C-10. These include an illuminated Bowtie emblem in the grille, the automaker notes, along with LED headlamps and taillamps, “and a lowered stance accented with 20 x 9-inch front and 22 x 10-inch rear wheels.”

The instrument panel gets new digital displays for the electric propulsion system; while the rest of the cabin has largely been restored to its original appearance, but for the leather-trimmed seats.

While a production version of the E-10 itself doesn’t appear to be in the works, GM has confirmed plans to develop an all-electric, full-size pickup widely expected to reach market within the next two to three years.