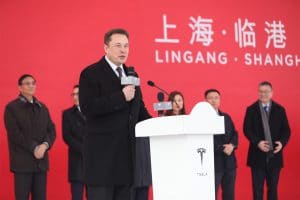 Elon Musk was on hand for the Shanghai groundbreaking last January. It will be the template for new Gigafactories, he said.

Musk revealed the location of the new plant during an awards ceremony in Germany, according to Reuters. He said it will be close to the Berlin airport, and the company will also open an engineering and design center in the city.

During the company’s most recent earnings call last month, Musk said the company would reveal the spot for the new plant soon. It will be begin production in 2021.

The EV maker is in the process of ramping up production at its new plant in Shanghai. The new plant is producing the Model 3 for China.

“When people see the outside shell of the factory which was essentially underwater in January, it was below the water table literally,” Musk said last month.

Tesla’s newest Gigafactory will be near Berlin and in production by 2021, CEO Musk said.

“What is much more significant is that we were able to install massive stamping machines, a fully operational paint shop, and a sophisticated general assembly line. I’m not aware of any factory of this magnitude in history being constructed in such a short period of time, approximately 10 months, as far as I know it’s unprecedented.”

The Shanghai plant will become the “template” for future growth, he noted. It makes Model 3 sedans now, but “we’re planning to build Model Ys in Shanghai as well.”

(Tesla gets the go, could start up Shanghai Gigafactory this month)

This kind of flexibility in its Gigafactories is likely to be important over time as the company’s global order rate continues to increase, and the backlog is growing, he noted.