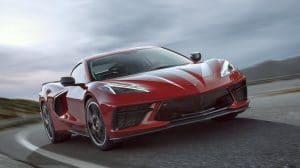 We knew the 2020 Chevrolet Corvette Stingray was going to be fast – so much so that Chevy officials hinted it would give the outgoing C7 ZR1 a serious run for the money. But now, we’re learning just how quick it really is, and even a “base” version of the two-seater could make Porsche and Ferrari fans break out into a cold sweat.

According to the bowtie brand, the base version of the 2020 Chevrolet Corvette will sprint from 0 to 60 mph in a mere 3 seconds. And, with the Z51 package, the number drops to just 2.9 seconds. To add some perspective: most tests suggest that the outgoing C7-generation ZR1 can barely muster a 2.8 to 2.9-second 0-60 launch.

The newly released numbers are likely only to increase demand for the first-ever mid-engine ‘Vette. And the frustration of having to wait. Due to the six-week strike that shut down parent General Motors, we expect the first C8 models likely won’t reach U.S. showrooms until late winter and, perhaps, even early spring 2020.

The wait seems likely to be worth it for those who chase performance numbers, however. Consider this: the Stingray with the Z51 pack – which adds an extra 5 horsepower and 5 pound-feet of torque – becomes a car that the competition may now rue. There’s a substantial list of exotics it can match or beat through the traps, according to Motor Trend, including the McLaren Senna (and 600LT), as well as the Porsche 911 GT3 RS. 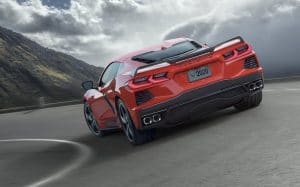 The new Chevrolet Corvette Stingray is powered by a 495-horsepower mid-engine V8.

There are still more numbers likely to impress. Chevy says the C8 Corvette with the Z51 pack will blast through the quarter mile in 11.2 seconds, hitting the traps at 123 mph. That’s about the same time it took TheDetroitBureau.com to manage the quarter-mile last month in a Ford Shelby GT500, though the exotic Mustang finished the run at around 130 mph.

The numbers for the latest-generation Corvette should surprise folks who, until now, had only had a limited number of specs to work with. The base model did get a sizable boost over the old C7, but still makes “just” 490 hp and 465 lb-ft from its 6.2-liter naturally aspirated V-8. The current ZR1 hammers out 755 horsepower.

“The LT2 is one of our best efforts yet in Corvette’s history of naturally aspirated high-performance small block V-8 engines,” said Jordan Lee, GM’s global chief engineer of Small Block engines. “This engine is incredibly powerful and responsive. Power is readily available when the driver needs it.” 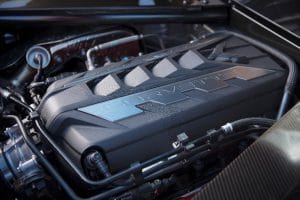 How do you deliver virtually identical performance? The addition of another 5 hp and 5 lb-ft with the Z51 helps but shouldn’t be the game-changer. In earlier conversations with Corvette Chief Engineer Tadge Juechter and other members of the team, we got some inklings as to what really makes the difference. To start with, the shift to a mid-engine layout completely changes the new car’s weight balance, something especially useful during an aggressive launch.

But Juechter had particularly high praise for the Tremec eight-speed dual-clutch transmission which can manage to shift in less than 100 milliseconds – less time than it would take you to simply depress a manual transmission’s clutch pedal.

“The goal from the beginning was to design a transmission worthy of an exotic supercar that is fun to drive every day,” said Terri Schulke, GM global chief engineer of transmissions. “We achieved that goal by combining the best attributes of the LT2 and the DCT, and I think the impressive performance numbers speak for themselves.” 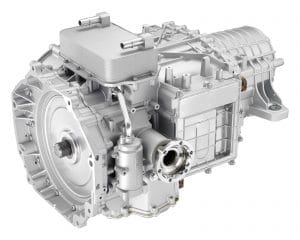 The new car’s customized rubber, finally, helps ensure that all that power makes it to the pavement.

There are, by the way, some trade-offs when going from the base car to the Z51 package. The upgrade gets a front splitter and rear spoiler to add more downforce. That helps at high speeds, particularly on track. But those elements also increase aerodynamic drag.

We’ve already posted a review based on a short drive in the new Corvette. We hope to get a better sense of what the C8 can do in a variety of situations, but with the strike delays, a longer driving experience likely won’t happen until early in 2020.