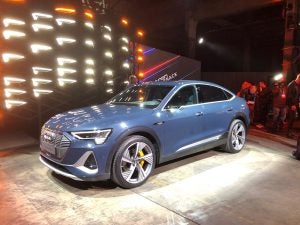 Audi will begin building the e-tron Sportback at the Neckarsulm plant.

Audi’s new 10-year labor agreement with two plants in Germany allows the automaker to cut 9,500 jobs during the next five years, with a promise of extending job guarantees and adding 2,000 jobs back as the company expands its production of electric vehicles.

The company says the job cuts will come from employee turnover and earlier-retirement packages the company plans to offer between now and 2025. The move to cut the jobs, nearly 11% of its workforce, will save the company 6 billion euros, or about $6.6 billion, which will be reinvested in the company’s electric vehicle and mobility efforts.

The agreement between management and the workers sees annual production capacity at Audi’s German plants in Ingolstadt and Neckarsulm at 450,000 vehicles and 225,000 vehicles respectively.

“The company must become lean and fit for the future, which means that some job profiles will no longer be needed and new ones will be created,” Audi said in a statement. 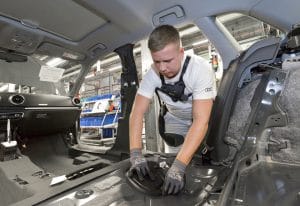 Audi’s Ingolstadt plant is expected to produce as many as 450,000 vehicles in the future.

The cuts do not just apply to hourly workers, but management positions as well. When it’s all said and done, the goal is to help Audi reach a profit margin of 9-11%. Additionally, the German automaker, which is owned by Volkswagen AG, extended a guarantee of no forced layoffs of its union workers until the end of 2029.

Audi agreed to extend an employment guarantee which rules out forced layoffs for its workforce until the end of 2029, something which had been a sticking point in discussions between management and labor representatives.

“We have reached an important milestone: The jobs of our core workforce are secure,” said Peter Mosch, chairman of the general works council of Audi, in a statement. “The extension of the employment guarantee is a great success in difficult times.”

(Audi electric plans include wave of plug-ins, along with all-electric models)

Audi said a fund would be set up at the Neckarsulm site to fund the shift toward electric vehicles and would be worth 300 million euros by 2025.

“In times of upheaval, we are making Audi more agile and more efficient,” Audi CEO Bram Schot said. “This will increase productivity and sustainably strengthen the competitiveness of our German plants.” 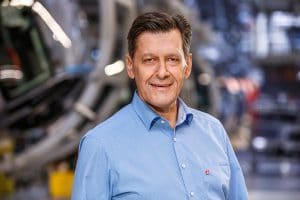 Rolf Klotz, chairman of the Neckarsulm Works Council, said he’ll be ensuring Audi keeps up its end of the deal.

The long play at the two plants is electric, with two models being manufactured at each one. The Ingolstadt site is currently preparing for the production of premium electric vehicles. In Neckarsulm, the all-electric Audi e-tron GT will already drive off the assembly line as of 2020.

The other production lines will also be gradually equipped for electric mobility.

“We see it as the management’s duty to keep their promises,” said Rolf Klotz, chairman of the Neckarsulm Works Council. “With long-term electrification, Audi.Zukunft is now creating facts. We are thus securing the future viability of the Neckarsulm plant.”

An “Electrification Neckarsulm” fund is being set up specifically for this purpose. By 2025, a total of 300 million euros will flow into this fund to secure the necessary construction measures for the production of electric vehicles in Neckarsulm.