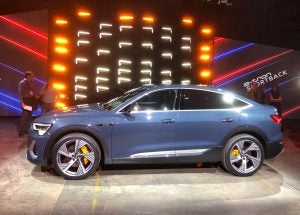 Audi, the largest of the Volkswagen Group luxury brands, is making an aggressive push to electrify its line-up, pulling the covers off its second all-electric model, the e-tron Sportback, at a preview marking the start of this year’s Los Angeles Auto Show.

Set to go on sale in Europe next February — and the U.S. a few months later — the coupe-style Sportback follows to market Audi’s first long-range battery-electric vehicle, the more traditionally styled e-tron, which went on sale earlier this year. An array of additional BEVs will follow, Audi officials confirmed, though the only one they will specifically talk about is the e-tron GT which made its debut in concept form at the 2018 L.A. Auto Show.

Audi intends to “unleash the beauty of sustainable mobility,” proclaimed Scott Keogh, CEO of Volkswagen Group of America, during the Tuesday evening preview of the Sportback.

(Live from LA! Check out our complete auto show coverage!)

As with its parent, Volkswagen, Audi’s commitment to battery power came relatively late. Until a few years ago, it was pressing diesel power as the solution to environmental issues and increasingly stringent emissions and mileage standards. That changed with the revelation that it, like the Volkswagen brand, had cheated on emissions tests. 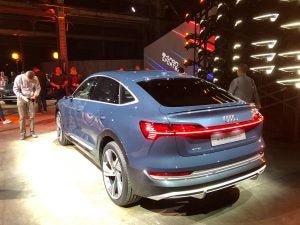 Since the scandal began to unfold in September 2015, parent Volkswagen AG has paid out over $30 billion in fines and settlements — including $2 billion to fund Electrify America, a start-up promoting electrification and setting up a huge American EV charging network. Audi itself saw its former CEO Rupert Stafler arrested arrested for his role in the scandal.

While diesels will remain part of both Audi’s, and the broader VW empire’s, powertrain alternatives, they are expected to phase out over the coming decade — and sales demand has already begun to decline in the long diesel-centric European market.

Audi expects EVs to replace oil-burners and wants to get out front of that curve.

For those already familiar with the original e-tron, the Sportback will provide few surprises beyond the more coupe-like design.

Under the hood — or, more precisely, under the skateboard-like platform it rides on — it shares the same drivetrain as the original e-tron SUV. That means twin electric motors, one driving each axle, and producing 355 horsepower and 414 pound-feet of torque. Audi claims that will launch the Sportback from 0 to 60 in about 5.7 seconds.

(Check out the most notable debuts coming to the 2019 LA Auto Show.)

The 95 kilowatt-hour lithium-ion battery pack, meanwhile, will deliver 277 miles of range using the European WLTP test cycle, Audi estimates, but that will be a lot closer to the roughly 200 miles the e-tron gets in the U.S. using the EPA test process — though Audi officials indicated better aerodynamics on the Sportback should give it at least a slight range increase over the e-tron. 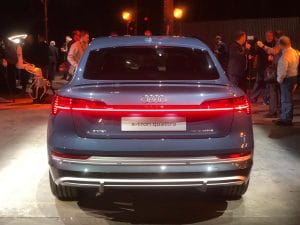 That has been one of the biggest complaints lodged against the first AUDI BEV. While that’s twice the range of first-generation electric vehicles, 200 miles is today seen as barely an entry point. And it’s particularly disappointing, analysts suggested, considering the size of the Audi battery pack. With its only slightly larger 100 kWh pack, the Tesla Model X AsUV delivers nearly 300 miles per charge.

The Audi e-tron has received generally favorable reviews on most other attributes, including its performance and handling — as TheDetroitBureau.com said in a review earlier this year.

But the original SUV has taken hits for its relatively conservative design. If anything, it can easily be confused with the German marque’s conventionally powered Q8 crossover.

For his part, Audi design chief Marc Lichte makes no excuses for Audi’s approach. The relatively conservative approach by a brand known for its aggressive designs is necessary to get potential buyers “comfortable” with electric vehicles, explained Lichte. But that is just the way he plans to start out.

“Step by step,” he told TheDetroitBureau.com in an exclusive interview, “our (BEVs)will become more progressive” in their design.

(Volkswagen pushes the boundaries with its ID Space Vizzion Concept – and it will reach the U.S. in 2022.) 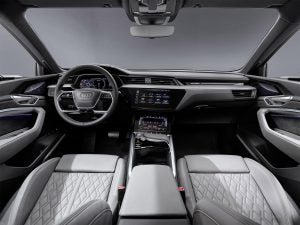 Like the e-tron, the Sportback opts for a high-tech cabin with few traditional switches and controls.

As an example, Lichte pointed to the much more radical e-tron GT concept shown in LOS ANGELES last year. It is scheduled to reach global showrooms in another couple years.

They also will see significant changes in their underlying technology that should improve range, as well as performance and handling.

Both the e-tron and e-tron Sportback are based on a very early “architecture” known as the MLB — not to be confused with the MEB platform that will be used by dozens of electric vehicles for the low end of the Volkswagen Group product spectrum. The e-tron GT will switch to a more sophisticated architecture, dubbed J1, and will share much of its technology with the new Porsche Taycan.

Eventually, the two luxury brands will switch again to the new PPE platform they are jointly developing.

By then, Audi hopes it will be seen as a leader in electrification, with its showrooms filled with battery vehicles covering a wide spectrum of market segments. That will likely depend on how well it’s first offerings, including the e-tron and e-tron Sportback, are received.

(Toyota bets the U.S. is primed for new PHEVs as it charges into the L.A. Auto Show with the new RAV4 Prime.)