During the course of the credits, the total could hit $1.4B, tax watchdog claims.

The IRS may have allowed more than $73 million in improper electric vehicle tax credits during a five-year period.

If you bought an electric vehicle and made a claim for the $7,500 tax credit on your taxes, you might want to pull out those old returns as a tax watchdog says tens of millions of dollars in credits were claimed inappropriately.

According to an audit by the Treasury Inspector General for Tax Administration, more than $70 million in tax credits may have been improperly claimed during a five-year period.

The questionable claims were found in 16,510 individual tax returns during the 2014-2018 processing years, TIGTA claims. Those filers received $73.8 million in potentially erroneous credits. Another 1,508 people an additional $8 million.

Overall, TIGTA found more than $1.4 billion in credits were paid to almost 240,000 taxpayers during the same period that were reviewed as part of the audit. In October 2018, the Joint Committee on Taxation estimated that the credit would cost $7.5 billion over a five-year period (Fiscal Years 2018 through 2022). 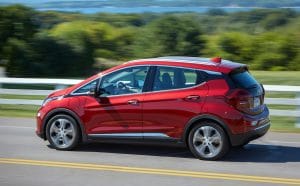 GM, with the Chevy Bolt, is one of two U.S. automakers to exceed the 200,000-unit threshold for the EV tax credit.

Details about how taxpayers improperly claimed the credits were mostly redacted, though the audit found that the Internal Revenue Service lacks an effective process to prevent improper claims under the program, which awards as much as $7,500 for electric-car buyers, Bloomberg reported.

“Although the IRS has taken steps to address some of TIGTA’s previous recommendations to improve the identification and prevention of erroneous credit claims, many of the deficiencies previously identified still exist,” according to the audit.

While the plans to crackdown on the mistakes, errant filings (intentional or oherwise) are important, it’s also important to know that the IRS plans to start a program to recover erroneous credits, among other steps, according to a summary of the audit.

The EV credits were part of the American Recovery Act of 2009, which was aimed at jumpstarting the economy mired in a recession. Earlier credits were available, according the TIGTA report, but the current set up of a $7,500 credit available to buyers of vehicles until that automaker sold 200,000 units and then it phased out over a one-year period was part of the legislation. Thus far on Tesla and General Motors have surpassed the total.