Partnering with others is becoming more and more common. 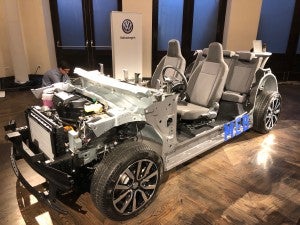 VW’s modular MEB battery-car platform could be the starting point for a lot of automakers – for a price.

Volkswagen Group is ready to share — for a price.

The German company is reportedly talking with other automakers about sharing its electric vehicle technology, for a fee, of course, expected to be used for its Porsche and Audi EVs, according to Automotive News.

The automaker’s already agreed to a deal with Ford Motor Co. helping the Dearborn, Michigan-based company’s efforts to make up for lost time on its battery-electric program. VW’s technology won’t be the only tech Ford uses for its electric vehicle portfolio, but it does help it cut a few corners, saving time.

VW is looking to monetize the technology it used in upcoming Porsche and Audi EVs, according to Ulrich Widmann, Audi’s head of development for the joint Audi-Porsche project. Called the Premium Platform Electric (PPE), it is a platform that can serve as the base for multiple vehicle models.

In the wake of dieselgate, VW threw its research and development funding into accelerating the development of its electric vehicle program. The company says it will have 50 different model EVs on the road by 2025. Through April 2019, VW planned to spend $91 billion on EV technology, the largest commitment of any automaker, Reuters reported.

By licensing its EV platform to other automakers, VW can make back some of that money now and perhaps plowing those funds back into the development of future vehicles and technologies. Although Ford may have been the first automaker to reach a deal, it’s lik 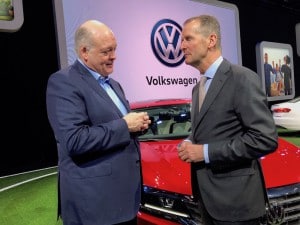 ely that the next ones will be much smaller companies.

Daimler plans to unveil 130 electrified vehicles, including hybrids and fuel cells, by 2030, and has budgeted $30 billion for batteries. Kia is putting $20 billion during the next five years. And as soon as General Motors resolves the ongoing strike with its UAW workers, it will resume its massive investment in its electric and autonomous vehicle program as well.

According to a study released by consultancy AlixPartners in June, manufacturers will invest a collective $225 billion in electrification between 2019 and 2023, while spending on self-driving vehicle efforts will rise to around $85 billion annually by 2025.

In July, Jaguar Land Rover announced it will invest about $1.3 billion to start producing electric vehicles at its Castle Bromwich plant, starting with a BEV version of the XJ, its flagship sedan. That news came barely a month after the British-based automaker said it would team up with erstwhile competitor BMW to share battery-car development efforts. Ford also has a joint venture with electric truck maker Rivian.