UAW Presents GM With a Counteroffer It Says Could End Strike 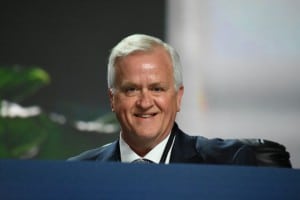 Terry Dittes, vice president of the GM Department for the UAW, said if the company agrees to its counteroffer, they’ll have a tentative agreement.

General Motors Co. is reviewing a counteroffer from the United Auto Workers, which the union said could lead to a tentative settlement in the monthlong strike by 48,000 UAW members.

Terry Dittes, the UAW’s top negotiator, emphasized in a letter to union members the letter was a serious effort to end the costly strike. “With this latest comprehensive proposal, if GM accepts and agrees to this group of proposals, we will have a tentative agreement,” Dittes said in his letter.

“We will continue to work, again, over this weekend to reach a tentative agreement on your behalf,” Dittes added. 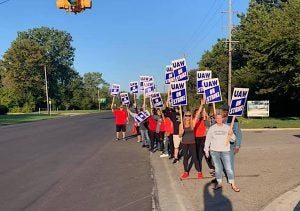 UAW picketers have been told to be prepared to stay out on strike for a while. The wait may be over soon.

Earlier in the week, GM had presented the union with an offer that Dittes said fell short in critical areas, particularly job security, which the union defines as specific investment in plants and product lines that would provide work for union members. The union also wants work allocated to plants GM has vacated earlier in the year and to cap or reverse GM’s investment at operations in Mexico.

The UAW’s counter offer also came shortly after GM indicated it was willing to increase its investment in U.S. plants to $8.3 billion, a major improvement compared with the $7 billion that GM offered on Sept. 15, the day before the union launched the strike that has shuttered GM factories across the United States.

Analysts said they believed GM had held back some investment commitments to bolster its offer at a key moment.

Other elements of the offer GM, sources said, include a $9,000 signing bonus for full-time employees and a $3,000 signing bonus for temporary employees. It also proposes raises of 3% in the second and fourth year of the contract and lump sums of 3% and 4% payments in the first and third years as well as uncapped profit sharing. It also maintains the current package of health-care benefits.

(After Some Optimism, GM and UAW Talks Grind to a Halt)

The GM offer also calls for shutting the UAW-GM Center for Human Resources on the Detroit River, which has been the center the scandal-ridden joint training programs for the past two decades and a path for temporary workers to reach full-time status after three consecutive years of full-time employment.

The devil, however, is in the details.

GM Chairman and CEO Mary Barra got involved in the negotiations with the UAW.

Dittes said the UAW’s counteroffer addresses all the demands of union members, including, presumably, issues that haven’t gotten a lot of attention such as pensions and apprenticeships for skilled trades.

The union counteroffer comes after a tumultuous 24-hour period highlighted by barbed comments from both sides.

Dittes re-iterated the UAW’s contention that GM has failed to address the union’s concerns about job security, while Scott Sandefur, GM’s North American vice president of labor relations, said the union was dragging its feet and suggested round the clock bargaining.

Gerald Johnson, GM executive vice president of manufacturing, also told employees in a letter that GM wanted to see the dispute, which may have cost GM more than $1.6 billion, resolved as soon as possible.

“We have advised the union that it’s critical that we get back to producing quality vehicles for our customers. We are committed to the collective bargaining process, and we are committed to our future together,” Johnson said in a letter to employees.