Typically they stay on strike until workers ratify contract. 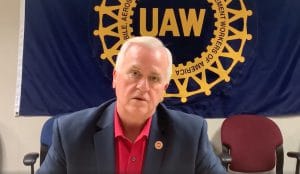 UAW VP Terry Dittes said the GM National Council will determine when the picketers will end their strike at its meeting on Thursday.

The United Workers GM National Council will decide today to pull the pickets from around the General Motors Co. plants across the United States in the wake of a tentative agreement between negotiators for the company and the union or leave them in place until an agreement is ratified.

In a letter to union members, Terry Dittes, UAW vice president and the union’s top negotiator with GM, said the picketing by 48,000 union members would continue until the conclusion of today’s council meeting. After the meeting the strikers “will receive further instructions.”

Dittes didn’t offer any details or tout any gains in the tentative agreement. “The number one priority of the national negotiation team has been to secure a strong and fair contract that our members deserve,” he said.

However, he emphasized the tentative agreement has been endorsed unanimously by the UAW’s GM bargaining team, which had been deeply involved in the negotiations, which, at several points, had frustrated GM negotiators during the 30 days of negotiations followed the union’s decision to strike on Sept. 16.

“We can confirm the UAW’s statement regarding a proposed tentative agreement. Additional details will be provided at the appropriate time,” said Dan Flores, GM spokesperson. 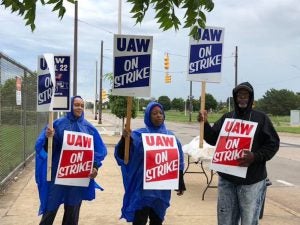 UAW members will continue to picket through the meeting of the GM National Council.

The tentative agreement apparently built on a series of contract proposals that GM offered the union, starting on Sept. 15. The tentative terms included a health-care plan with the company picking up the cost that includes some additional benefits designed to encourage union members to make more cost-effective use of their benefits and a $9,000 signing bonus.

The union also succeeded in pushing GM to reduce the grow-in period for “in progression” employees to four years from 8 years and a pathway for temporary workers to be considered full-time employees after three years of employment with GM. The contract also includes a 3% pay increase for workers in the first and third year and lump sum payments of 3% and 4% in the second and fourth year of the agreement and changes in contract provisions giving new workers more flexibility for scheduling their vacations.

The tentative agreement also includes a commitment of $9 billion by GM for new plants and products, according to the proposals GM outlined for the union last. However, sources said the figure is incomplete. The union agreed to temporarily set aside the fate of the GM assembly plant in Lordstown, Ohio. The union, which legally retains some leverage, wants GM to build a new vehicle in Lordstown, and has declined to endorse turning plant over to a third party.

The union also concerned about a fight about ratification, which even if the GM contracts is approved by striking workers, could spill over to the ratification votes at Ford and FCA, where workers rejected a contract in 2015. Negotiators at Ford and FCA are in a position to wrap up work on new tentative agreements if the tentative pact with GM is ratified.

Complicating the return to work, is the fact that GM and UAW have yet to complete a contract for some 850 employees of Aramark, which handle housekeeping at a half-dozen GM plants in in Michigan and Ohio.

The UAW agreed to set aside the problem of the Lordstown, Ohio plant and tackle it separately.

Union sources said they hope to finish up a contract within the next couple of days. However, if not some union members, including those at the big GM truck assembly plant in Flint, Mi., could decline to cross the picket lines put up by Aramark employees.

Commentary on the tentative agreement posting about the contract on social media was generally skeptical.

“So we go on strike for 5/6 weeks they close three plants and all we gain is cap off of profit sharing. IUAW think it’s a good deal their crazy,” one blue-collar worker said.

“So far everything I’m reading we are going back to work 6-7 days a week 9-12 hrs a day with no change, temps will still be temps, progression employees will still be just that, some will get $9k others will get $3k signing bone-us!! Continuing the division, profit sharing will be uncapped but again only some will get it not all. No COLA and again no significant raise for traditional workers crumbs,” said another.