And the 10 you’ll likely keep the longest.

Some cars look great – until you actually buy them, and then, suddenly, you discover any number of reasons why you want to trade them in in a hurry.

For a variety of reasons, about 3% of the vehicles American motorists buy new will be sold or traded in during their first year of ownership. But a new study by iSeeCars found that the figure runs substantially higher for some products. About 12.4% of new Mercedes-Benz C-Class models are sold or traded in during the first year, more than any other model, according to the study.

On the other hand, there are also some products that owners are loathe to let go of. On average, Americans keep their vehicles about 8.4 years, but a separate study by iSeeCars identified the models that they were likely to hang onto the longest.

Here’s a look at the vehicles likely to be gone the quickest, and those that will hang out in your driveway the longest.

To find out which products were traded in most quickly, the website looked at data on more than 46 million new cars sold between July 2013 and December 2018 – covering the 2014 to 2017 model-years. It also took care to exclude those involved in a process called “car punching,” where dealers used a vehicle as a loaner and then see it as used when it likely has less than 1,000 miles on the odometer.

The top 10 list included eight German and British luxury cars, but the others were the two lowest-cost models in the Nissan line-up:

10.) Nissan Versa. About 8.7% of these compact sedans and hatchbacks were traded in during the first year;

9.) Jaguar XF. Put the blame on high operating costs, according to iSeeCars which said 8.8% of these were resold;

8.) Nissan Versa Note. The smaller hatchback version of the little Japanese model was resold by 9% of owners during the first year;

7.) BMW X3. The compact crossover has been wildly popular but below-average reliability could explain why 9% were resold, said iSeeCars;

6.) BMW X1. Buyers seem to have a love-hate with the smallest BMW Sport-Activity Vehicle, 10.4% of them being resold;

5.) Mini Clubman. The Mini brand has been suffering from slumping sales and the fact that owners quickly trade in the Clubman – 10.7% in year one – may explain why;

4.) Land Rover Range Rover Evoque. The British SUV marque’s most popular model is also the one most likely to be re-sold or traded in, at 10.9%, the first year;

2.) BMW 3-Series. The compact BMW sedan has long been the segment’s benchmark model but not every owner seems happy, 11.8% traded in during the first year;

1.) Mercedes-Benz C-Class. The original “Baby Benz” has grown larger and more lavish over the years, but it is still resold during the first year by 12.4% of owners – 3.7 times the industry average.

(Baby Boomers are the best drivers. Just ask them.)

At the other end of the spectrum, there are those cars, trucks and crossovers that owners simply fall in love with and never want to part with. Significantly, five of the 10 vehicles owners keep the longest are sports cars, with four SUVs and a single sedan, the Toyota Avalon, rounding out the list.

“While the average new car buyer holds onto their car for 8.4 years, there is a wide variety of cars that owners are more likely to keep longer,” said iSeeCars CEO Phong Ly. “Sports cars typically aren’t daily drivers and don’t accrue high mileage as a result, so it takes them longer to show signs of wear and tear.”

Here’s a chart showing iSeeCars’ list of vehicles likely to be kept the longest: 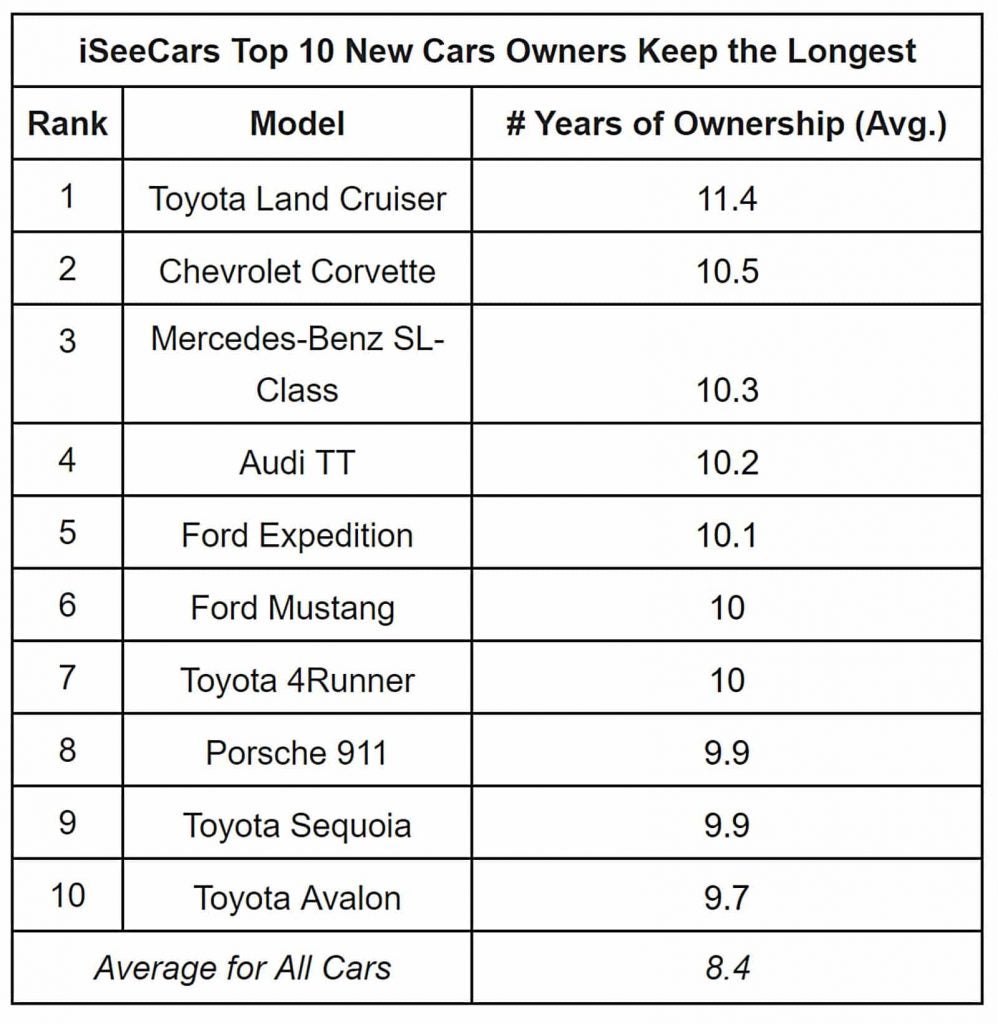