Testing the Best of Off-Road Offerings on Trail Trek Tour 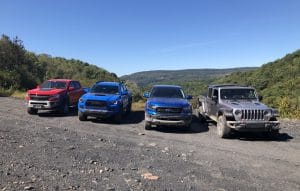 The Trail Trek Tour offers a chance to put four off-road equipped pickups through their paces.

I’ve been writing about the automotive industry for 22 years, and I’ve enjoyed some great experiences traveling and test driving a myriad of cars, trucks and SUVs.

On the car side, some of my favorite experiences have been on racetracks worldwide. Certain manufacturers, like BMW and Porsche, will give you dual experiences during media events, both on road and on track. Is anything more fun to do than drifting the latest BMW M car through turns at Road America?

Well the answer to that question is either no, maybe or yes. No, if you are a die-hard track enthusiast. Maybe, if you like to also experience the other side of the not-on-road part of our media experience-off roading. And, yes is the answer if you are a stone-cold enthusiast of rock crawling, water fording, hill climbing, side-tilt maneuvering and mudslinging in an SUV or off-road-equipped pickup.

For me, I love track events, but there is a significant amount of risk involved with driving flat out on a racetrack. Though accidents are rare, they do happen, and every time I complete an event safely, I give a prayer of thanks. Off-roading has some risks as well. I’ve been on Land Rover and Jeep media events that were truly “white knuckle” during the entire program, with crevasses and significant drop-offs while traversing terrain at altitudes approaching 16,000 feet and more.

My absolute favorite of them all is low-altitude off-roading, which is what I experienced recently during the Trail Trek Tour (TTT). 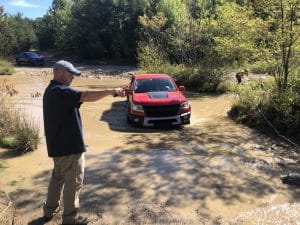 The Chevrolet Colorado ZR2 Bison was one of the four trucks tested.

What is the Trail Trek Tour? It’s the brainchild of Phil and Karla Van der Vossen, who also own the man stuff website, Gunaxin.com. The TTT is a traveling series of off-road events for automotive media. Phil and I have been on several media drives together and also both claim membership in the Washington Automotive Press Association, WAPA.

During WAPA’s Annual Rallies, Phil and Karla served as Rally Masters for several years, and deftly planned exciting drive routes and also shared meaningful and historical facts of the communities and regions we drove through during those rallies.

So when I received an invitation to be one of eight media members to participate in TTT Four, I promptly accepted, as I knew it would be not only a driving adventure, but I’d also learn a few things along the way.

TTT Four was held in Danville, Pennsylvania, a former coal town that was not only rich in coal, but also in the culture of those who live in Pennsylvania – hard working, friendly people who enjoy life, nature, and meeting and greeting others in their communities. Danville was no exception to that, as our home base at the Pine Barn Inn saw travelers from around the U.S. who came to fish along the 444-mile long Susquehanna Rivers, or hunt for Mallard and Black ducks in the Atlantic Flyway.

The land that the Pine Barn Inn rests on today has a very interesting history. Back in the days of Pennsylvania Colony founder William Penn, the original 260-acre parcel of land that the Inn is on was deeded from Penn to General William Montgomery, a Revolutionary War patriot, congressman and postmaster. Originally referred to as Montgomery’s Landing, the area would become known as Danville after his son, Daniel Montgomery.

Danville is just a three-hour drive from my home in Maryland, and I drove up in one of the TTT Four off-road vehicles, the Jeep Gladiator Rubicon. After a great dinner and peaceful rest at the Pine Barn Inn the night before, it was time for Trail Day’s adventure!

With eight media members (including myself) in attendance, we paired off to swap drive time in the four designated TTT-Four vehicles: the aforementioned Jeep Gladiator Rubicon, the Chevrolet Colorado ZR2 Bison, Ford Ranger FX4 and Toyota Tacoma TRD Pro. 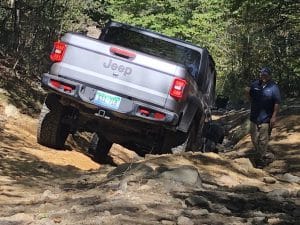 The Jeep Gladiator Rubicon handled rock crawling without any problem thanks to a sway bar that can be disconnected.

After a brief highway drive, we arrived at the Anthracite Outdoor Adventure Area (AAOA) in Coal Township, Pennsylvania. The 7,400-acre AAOA is an extensive off-road trail system for ATVs, dirt bikes and full-sized vehicles like our TTT-Four quad squad. The AAOA site rests on abandoned coal mining fields, tunnels and shafts, and still has an abundant quantity of coal above ground that made memorable souvenirs for us.

AAOA is headed by Dave Porzi, who manages his off-road instruction team, and the day-to-day operations of keeping everyone organized and safe on AAOA’s myriad trails. All trails are marked with a number/letter system, but with our trail guide, we were able to focus or wrangling the most out of our capable vehicles without worrying about staying on course.

After Porzi’s comprehensive safety briefing, it was time to get down and dirty. Each team of two in the four vehicles got 30 minutes behind the wheel under the direction of our trail guide Kyle before switching drivers. After one hour we switched vehicles. After two hours, we stopped for a hearty lunch and then paired up for the second two-hour block. So at the end, each driver experienced varying trail conditions that included hills, coal gravel, mud, water bogs, slick tree logs and large rocks.

First up for my drive partner Dan Carney and I was the same Jeep Gladiator Rubicon I drove to the event in. Think purpose built off-road master with a five-foot box to haul gear when you think Gladiator. It’s the first Jeep pickup truck since the Jeep Comanche was retired in 1992.

Jeep calls the Gladiator “the most capable midsize truck ever,” with “best in class” towing and payload, and a host of safety and advanced tech features. But what about off road? Well folks, it’s a “Trail Rated” Jeep, which means it was tested in environs far more difficult (like the famed Rubicon Trail it’s partially named after in the Sierra Nevada mountains) to navigate than the trails we faced at AAOA. 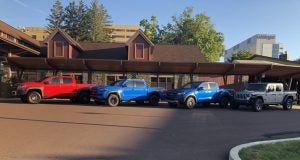 The Gladiator made easy work of everything we threw at it and had a best in TTT-Four water fording capability of 30 inches. Gladiator Rubicon also features a Rock-Trac 4×4 system with Tru-Lok front and rear axle lockers; skid plates and bars; heavy gauge rock rails; 33-inch off-road tires; an electronic sway bar disconnect; and trick forward facing off-road camera are among many other off-road goodies.

My favorite feature was the electronic sway bar disconnect, which allowed great wheel articulation when disconnected. This enabled the Gladiator Rubicon to make small work of obstacles like large rocks and slippery logs.

Up next was the Chevrolet Colorado ZR2 Bison. This was my first time driving a Colorado, and the ZR2 Bison is specially outfitted for off-roading. The Colorado ZR2, according to Chevy, has “more off-road technology than any vehicle in its class. From technical rock crawling to tight two-track trails to high-speed desert running and daily driving, Colorado ZR2 delivers exceptional performance.”

My favorite Colorado ZR2 Bison features were the AEV air snorkel, which took the worry of engine locking out of the water fording equation, and the vehicle’s super smooth highway ride manners. 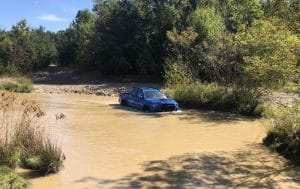 The Toyota Tacoma TRD Pro fords a stream during the Trail Trek Tour.

Our third leg was spent with the Ford Ranger FX4. Like the Gladiator, the Ranger makes its return after a hiatus since the 2012 model year. According to Ford, the popular midsize truck is “engineered and Built Ford Tough, ready for adventure and packed with driver-assist technologies to enable easier driving both on and off road.

I loved the clean exterior and interior design of the Ranger FX4, and found it surprisingly capable off-road given it only had one locking differential. Ranger’s dash and center console design and utility were top notch.

Last, but certainly not least was the Toyota Tacoma, which has led the midsize truck market in sales for 12 straight years. The TRD Pro series was introduced in 2014, born from Toyota’s rich racing and off-road heritage. TRD Pro series vehicles are well equipped, with a gaggle of standard equipment and optional equipment like my favorite, the TRD desert air intake. 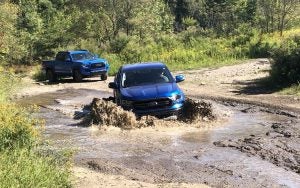 The Ford Ranger is more than doors deep in this stream with a Tacoma TRD following.

The Tacoma TRD Pro was the only manual transmission offering in this edition of TTT, and it performed exceptionally well on trails. The only drawback was the side assist steps, two on each side, reduced rock-climbing capability as they compromised ground clearance. If this is an option and you plan to use the Tacoma off road, unbolt the steps before you venture off road.

My favorite thing about the Tacoma TRD Pro is that it is a Toyota. That means you can beat the heck out of it and it will still serve you well if you service it well.

All in all, there was no clear-cut favorite amongst the TTT-Four clan. All were super impressive off and on road, with the convenience and utility a short box provides. For more information on the Trail Trek Tour, visit www.TrailTrekTour.com