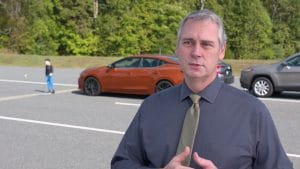 IIHS President David Harkey talks about how the group determines its rankings.

Halloween is just two days away, meaning America’s streets will be flooded with pedestrians at what is, potentially, the worst time of the day to see them. Even worse, they are usually the toughest pedestrians to see and react to for a driver: children.

The holiday that has kids walking around at dusk and later, sometimes without parental supervision, wearing masks that can be difficult to see out of as part of costumes that many times cannot be seen well by drivers at night.

Annual pedestrian fatalities have increased 53 percent since reaching a low point in 2009. More than 6,000 pedestrians were killed in 2018. During 2013-17, the two deadliest days of the year for pedestrians on average were Oct. 31 and Nov. 1 (or after midnight on Halloween).

However, some drivers have a secret weapon that may help them not only on All Hallows Eve, but every day: emergency braking systems. These systems are designed to help a driver who may not see or react quickly enough to an object in front of their vehicle, such as another car or a costumed child who has inadvertently entered the roadway. 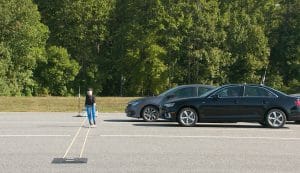 The IIHS uses three scenarios at two different speeds to develop its ratings.

Right now, the systems are an optional item on many vehicles, but by 2022 they’ll be standard on all vehicles. The Insurance Institute for Highway Safety teamed up with the Highway Loss Data Institute to determine what midsize vehicles offer the best systems to keep pedestrians safe and which need improvement.

About two-thirds of the vehicles that IIHS rates included pedestrian detection in 2019, in many cases as standard equipment. Among the vehicles evaluated in this current round of testing, pedestrian crash prevention is standard on all six luxury cars and six out of 10 nonluxury cars. It found the

“Pedestrians are the most vulnerable road users, so it’s encouraging that pedestrian crash prevention systems are standard equipment in 12 out of the 16 midsize cars we tested, including five out of six superior-rated systems,” said IIHS President David Harkey.

Most systems use one or two forward-facing cameras and/or radar sensors to scan for pedestrians that could step in front of the vehicle. The system uses algorithms determine if the detected objects are pedestrians. In some cases, they can recognize bicyclists or animals too. The system calculates that a collision is imminent and alerts the driver and applies the brakes faster than a human can react.

The performance of the systems varies widely, the latest IIHS ratings show. In this round, the Audi A4, BMW 3 series, Mercedes-Benz C-Class, Nissan Maxima, Subaru Outback and Volvo S60 earned superior ratings. The groups tested small sport-utilities earlier this year. 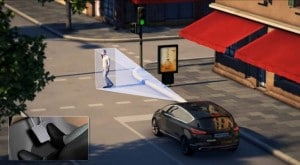 Conversely, the Ford Fusion, Hyundai Sonata and Kia Optima earn no credit because they failed to slow significantly in multiple scenarios. There are four rankings overall: superior, advanced, basic and no credit.

IIHS tests performance in three scenarios: an adult pedestrian stepping into the street in the path of the oncoming vehicle with an unobstructed view, a child darting into the street from behind two parked cars, and an adult pedestrian near the side of the road in the travel lane, facing away from traffic. The two perpendicular tests are conducted at 12 and 25 miles per hour, and the test simulating a pedestrian walking in a parallel path to the vehicle is conducted at 25 and 37 mph. In each of these tests, the system has 1 or 2 seconds to stop the car to avoid hitting the pedestrian dummy. The vehicles rated superior slowed down in all six scenarios while at the other end of the spectrum, some failed to slow down in any scenario.

One test is, admits IIHS chief Harkey, more difficult than the others. “The child dashing out from behind parked cars is a very challenging test,” says Harkey. “But it’s fitting that it was one of the main things that separated the top systems from the rest of the pack, since that is certainly a frightening scenario on Halloween or any day.”