UAW President Gary Jones should be removed from office, along with most of the union’s senior officials, claims a union veteran.

One few surviving links to the Walter Reuther era is calling for United Auto Workers President Gary Jones to step down from the union’s top job.

“We must support and hope the membership wins at GM and must also work to clean out the corruption in Solidarity House … unknown in my years of service from 1948,” the 94-year-old Paul Schrade, a former aide to the legendary Walter Reuther and a former member of the UAW’s executive, who observes the union’s affairs from his home in Los Angeles, said in an email.

“It’s embarrassing and has to be dealt with. The day have to do it quickly. Members of our union aren’t being served if your officers are stealing and ruining the reputation of the union,” he also said during a telephone interview.

“Officer and staff members have a special role in the organization. They really have to be respected,” he added. “Reuther kept salaries low. We never went overboard with salaries.”

“Reuther believed we shouldn’t be that separate from the membership. If you didn’t do a good job. we also way had the right to go back to your job (in the plant),” Schrade said in a telephone interview. “Reuther never tolerated corruption of any kind and left the union with a reputation for honesty.” 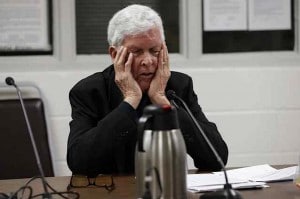 Walter Reuther era UAW official Paul Schrade is actively lobbying for the removal of union’s top officials due to the training fund scandal.

Schrade’s observations about the need for the union to clean house come on the heels of a federal investigation of the union that has taken a heavy toll. Five high-ranking union officials, including one UAW vice president, Norwood Jewell, have pleaded guilty to federal felony charges. A sixth union official is now expected to enter a guilty plea while a seventh, Vance Pearson, is awaiting arraignment in federal district court in Detroit. Pearson has taken a leave of absence from his post as the director of UAW Region.

The late General Holiefield, the former head of the UAW Chrysler Department, was cited by federal authorities for his role in the scandal at the joint UAW-FCA training center for his role in diverting thousands of dollars in training funds into his own pocket.

Jones is implicated in the same “information” that federal prosecutors filed against Pearson.

The scandal has cast a pall over the UAW’s negotiations with GM, where more than 48,000 union members remain on strike, and the other automakers and spawned hundreds of critical posts from UAW members on social media.

When the scandal first erupted two years ago then-UAW President Dennis Williams said the union planned its own investigation and report to members. The internal report has been superseded by the federal probe, according to a UAW spokesman.

However, the joint training funds that are at the center of the scandal have been criticized by union activists for years. They complain the funds, which file only limited reports with the U.S. Department of Labor, aren’t held to any kind of account. In addition, money from the funds have been manipulated and used for political patronage to help stifle dissent within the union’s ranks, activists have said over the years.

At one point, Schrade had served as an informal adviser to Jerry Tucker, the union executive board member, who led the New Directions Movement and challenged the UAW’s established leadership during the post-Reuther era.

Former UAW President Dennis Williams has been caught up in the UAW-GM training fund scandal.

Tucker, who died in 2012, was a leader of what “Labor Notes” described as the “troublemaking wing” of the UAW, had warned repeatedly the joint programs the union launched in the 1980s to nurture what was described as labor management’s cooperation could and would water down the UAW’s identity and corrupt the union – predictions borne out by the ongoing federal investigation.

In 1968, while still a member of the UAW executive board he was badly wounded by gunfire during the assassination of Robert Kennedy in Los Angeles after the New York Senator’s victory In California’s Presidential primary. Schrade was standing next to Kennedy as he delivered his victory speech at the Ambassador because of his key role in Kennedy’s successful campaign

He had served as Reuther’s liaison to Caesar Chavez and the United Farm Workers and coalitions that Schrade helped organize and build during the 1960s ultimately helped transform the culture and politics of the State of California.

Ultimately, though, divisions over the Vietnam War, which Schrade passionately opposed because, as he once told Reuther the “sons of our members were being killed,” alienated other UAW officers, notably Reuther’s successor Leonard Woodcock, cost Schrade his seat on the union executive board in 1972.

But like Tucker, Schrade, who had dropped out of Yale University in the late 1940s to join the union and was perhaps one of the most talented organizers the UAW put in the field, has been persona non grata at UAW headquarters in Detroit, but has still been honored for his impact on the union.

However, the library of the Robert F. Kennedy Community School, which sits on the site of old Ambassador Hotel. The library includes architectural details from the ballroom, where Kennedy gave his victory speech, noted Schrade, who was the “coordinator” of the RFK-12 Community Task Force back in the 1980s when the site was controlled by the Trump organization. The Task Force took the site away from Trump and it now serves more than 4,000 students in grades K-12. Most of the students or their families are from Central America. “They are the same kids Trump is locking up at the border,” Schrade said.

Throughout the years, however, union publicists such as Peter Laarman and Frank Joyce have demeaned Schrade’s contributions to the UAW  Instead, Laarman and Joyce, who recently wrote an op-ed claiming they were shocked at the corruption at UAW headquarters, spent a large part of their time as the union spokesmen trying to discredit dissidents and protecting the closed system by which the union selects its top officers an which installed in 2018 Jones as UAW president.

Instead the union’s character has been reshaped, in many respects, Jones mentor, former UAW President Stephen Yokich, an avid golfer, who even directed the construction of PGA-style championship golf course next to Reuther’s austere educational center in northern Michigan.

The retirement-home project for which Williams has drawn criticism was originally conceived in 2002 by the union staff, which was augmented by joint funds, as a retirement gift to the often irascible Yokich, who invented the term “fake news” long before it was used by President Donald Trump. 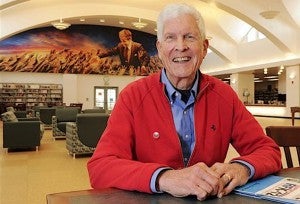 Schrade said the top officials should be the same, especially when it comes to salary, as the rank-and-file members.

However, golf is something of a subtext that runs through the UAW scandal, which involves charges the joint training funds were used for lavish entertaining that was often done around golf resorts with substantial greens fees.

In one case the illicit purchase of expensive golf equipment was a key charged leveled against one of the union officials who has plead guilty to a federal felony. Jones, it appears, has come under suspicion because of his participation in a conference at an expensive resort in Palm Springs with multiple golf courses. The FBI, according to one account, even looked carefully at Jones’ own golf clubs during the raid on his home outside Detroit.

During his tenure on the UAW executive board, Yokich also set the tone for a years of union concessions such as giving a greenlight to a new Ford Motor Col assembly plant in northern Mexico, the construction of the lavish GM-UAW training Center on the Detroit River, the spinoff of Delphi, which destroyed thousands of jobs and contributed to election of anti-union figures such as Trump.