At 3.8 seconds 0-to-60, the Taycan 4S will deliver Porsche levels of performance. 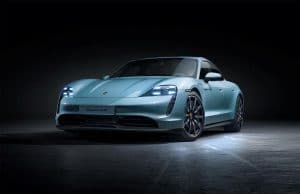 Shortly after its debut, Porsche’s rolled out a new version of the Taycan.

When it rolled out its first-ever all-electric sports car last month, Porsche made it clear more variants would be on the way – and, as TheDetroitBureau.com previously reported, the first of those would translate into something a bit more affordable.

Of course, at $103,800 including delivery fees, that’s likely a matter of perspective.

That said, the Taycan 4S will still present a formidable threat to anyone looking to challenge it at a stoplight, sprinting from 0 to 60 in just 3.8 seconds. By comparison, the Turbo model will get there in 3 seconds, the Turbo S in a mere 2.6 seconds. 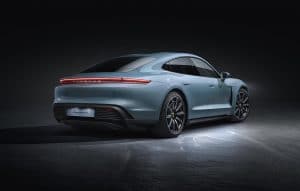 The Taycan 4S is the base model for Porsche’s new electric vehicle.

As with the original two Taycan models, final range numbers likely won’t be released until next year, closer to the actual on-sale date.

But, as with the Turbo twins, buyers will have the option to get two different versions of the Porsche Taycan S.

The base model will feature a 79.2 kilowatt-hour lithium-ion battery pack. The Performance Battery Plus option will take that up to 93.4 kWh. It will also give a buyer some extra power, jumping to 482 hp – 563 in overboost – and 479 lb-ft.

All of the Taycan models will be able to make use of the latest Level 3 charging systems. At 800 volts and up to 300 kilowatts of power, it will be able to jump from 5% state-of-charge to 80% in just over 20 minutes. Three years of free, 30-minute charging sessions at Electrify America stations will be included.

As with the more expensive models, the Taycan 4S uses twin electric motors, one on each axle, creating a through-the-road all-wheel-drive system that can readily shift torque from front to back, as needed.

The 4S will feature a three-chamber air suspension and Porsche’s 4D adaptive chassis. It will ride on 19-inch wheels, rather than the 20s on the Turbo, and 21-inch alloys on the Turbo S. The 4S gets red, six-piston fixed-calipers up front, and four-piston calipers on the rear axle, with internally vented cast iron brake rotors.

The interior will be a little less elite, with partial leather detailing – though, like the Turbo models, buyers also will be able to opt for a leather-free interior, something popular with green-minded buyers.

With the addition of the four-seat 4S, Porsche will give potential buyers an easier-to-accept alternative to the Tesla Model S sedan which starts at $92,615. However, when loading it up with the longer, 345-mile battery pack and optional Ludicrous Mode, a buyer can add tens of thousands to that base MSRP.

How much demand there is for electric vehicles in the $100,000-plus range is uncertain. Sales of both the Tesla Model S and the Model X SUV have slowed considerably this year. 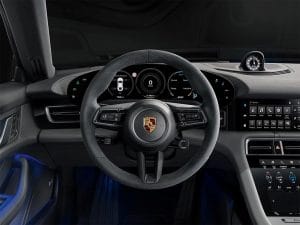 One explanation, according to industry analysts, is the availability of the far less expensive Model3. But Tesla has done relatively little to update the Model S, especially its exterior and interior design, in recent years, which is also being blamed for slowing sales.

While carmakers like General Motors, Audi and Jaguar have had a tough time peeling off some of Tesla’s market share, Porsche is betting its vaunted reputation will help it do better among sports car aficionados.

Porsche said it is now taking orders for the Taycan 4S model, with U.S. deliveries expected to start next spring.