First Look: Mazda MX-30 EV Will Be Followed by Hybrid and PHEV Versions 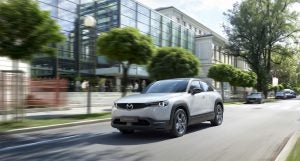 Mazda’s first EV is the new MX-30 SUV, which debuted at the Tokyo Motor Show.

After weeks of teasing its new all-electric model, Mazda has pulled the covers off the MX-30 at the Tokyo Motor Show and it offers up some interesting surprises.

The relatively short, 125-mile range offered by the electric SUV, for one thing, might disappoint potential buyers, especially at a time when competitors are largely pushing over the 200-mile barrier and, in some cases, past 300. Then there’s the unusual decision to give the new Mazda MX-30 suicide, er, freestyle doors.

There are a number of advantages, a statement from Mazda explained, noting that the MX-30’s “unique center-pillar-less Freestyle doors with custom-designed hinges … allow the front doors to open 82 degrees and rear doors to open 80 degrees. This not only makes entering and exiting the car and loading and unloading cargo easier but also provides easier access for strollers and wheelchairs.”

Mazda also revealed that while the debut focuses on an all-electric version of the SUV, it also plans to offer both conventional hybrid and plug-in hybrid versions of the MX-30. 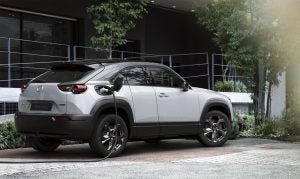 The all-electric version uses a relatively modest-sized, 35.5 kilowatt-hour lithium-ion battery. That’s enough for a bit “more” than 125 miles per charge, according to Mazda. By comparison, the second-generation Nissan Leaf – not the extended-range Leaf Plus – features 40 kWh of energy and gets about 150 miles of range.

Power is directed to a single motor driving the front axle and making 141 horsepower and 195 pound-feet of torque. That should be able to give it a push to 60 in a not especially sporty eight or nine seconds.

There is an option coming for those who want more range, a plug-in hybrid version of the MX-30. More accurately, it’s an extended-range electric vehicle, and it marks Mazda’s first use of the once-familiar rotary engine since it abandoned the old RX-8 sports car.

Here, the rotary will serve solely as a generator, providing power to that front-mounted motor once the battery runs down. It could also add a bit more energy to boost launch times and improve passing behavior. 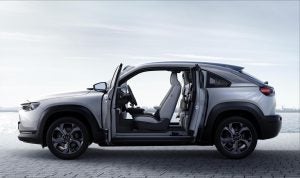 One of the more unusual features of the MX-30 is the synthesized audio that Mazda introduces to give a driver a sense of how much power they’re sending to the wheels. It’s what drivers are used to with gas-powered vehicles, but a novel approach for an otherwise near-silent EV.

Both plug-in versions of the Mazda MX-30 will have 50 kilowatt fast-charging capabilities, meaning an 80% top-off of a drained battery should take less than an hour.

Mazda has yet to offer details of the conventional hybrid version of the new SUV, though it will likely opt for one of its new SkyActiv engines, rather than the rotary, with the betting on the advanced SkyActiv-X powertrain that delivers diesel-like fuel economy and gas-like performance.

Visually, the MX-30’s freestyle doors are the SUV’s most unique detail. A closer look reveals a different grille design than seen on Mazda’s other SUVs. 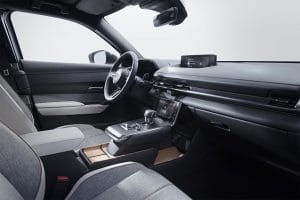 The MX-30 synthesizes audio to give a driver a sense of how much power they’re sending to the wheels.

The battery-car’s underlying platform was developed specifically for electrification — with the battery pack mounted under the floor — but also to allow for the variety of different powertrains Mazda will use on the MX-30.

(Is Mazda Planning to Bring Vision Coupe Concept – and New Engine – to Life?)

Mazda has been a laggard when it comes to electrification but the new MX-30 is likely to be just the first of multiple EVs coming. Several years ago, the Hiroshima-based automaker entered a joint venture with Toyota that will, among other things, see them set up and jointly operate a new assembly plant in Alabama. But they also plan to develop and build new battery-cars that should start rolling out in another two to three years.