Chevy doesn't want to be caught by its new competition. 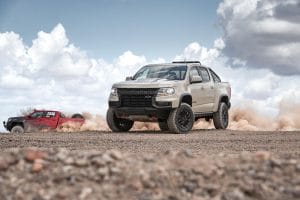 The 2021 model marks the first significant update for the Chevrolet Colorado.

It’s easy to forget that, just four years ago, the midsize pickup segment seemed destined to dry up and vanish as more and more competitors tossed in the towel. It took two new offerings from General Motors, the reborn Chevrolet Colorado and GMC Canyon siblings, to prove that there was plenty of life left.

The Colorado, in particular, remains one of the most popular models in the midsize market, lagging behind only the long-lived Toyota Tacoma. But, with plenty of new competitors, such as the Ford Ranger and Jeep Gladiator, closing in, there should be no surprise that Chevy is rolling out a significant midsize update – and giving us a first look at the 2021 Colorado.

“With its new-look front end and tailgate, Colorado will now have a more aggressive appearance to match its award-winning capability,” proclaimed Bob Krapes, director of marketing for Chevrolet Trucks, in a statement accompanying these pics of the bowtie brand’s updated pickup.

(GM-UAW strike continues to grind on. Why aren’t the two sides settling? Click Here for the latest.) 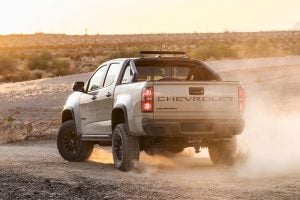 The 2021 Chevy Colorado is expected to retain the three powertrain options currently offered.

Produced at the General Motors plant in Wentzville, Missouri, Chevy isn’t saying precisely when the updated Colorado will reach showrooms – and the automaker’s current strike by the United Auto Workers Union could complicate all upcoming product roll-outs. But the fact that it released these images now – and will show the updates publicly at next month’s SEMA Show in Las Vegas – suggests a timeline somewhere during the first half of 2020.

Across the board, we’ll see more variations between the various trim levels of the 2021 Chevrolet Colorado, though some basic tweaks will link them together, including a new version of that familiar bowtie logo on the grille and the brand name, Chevrolet, embossed on the tailgate.

The ZR2 will get even more aggressive detailing, starting with the dramatic lower front fascia with its twin red tow hooks. The off-road-oriented model also will get new Multimatic dampers, a 3.5-inch wider track, 2.0 inches more lift and both front and rear electronically locking differentials. There are also beefed-up skidplates.

(This familiar Chevy is one of the vehicles owners hang onto the longest.) 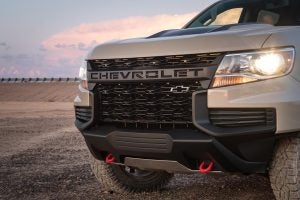 Each trim level will get some unique styling details, including grille and bowtie badge.

The WT and LT trims get new grilles with gold-framed Chevy logos, though the bowtie is black-badged on the Z71 edition.

As for the interior, expect only minor new touches, at most. There could be some updates to the electronics, or so many fans are hoping. The Chevy truck could use some updates to its advanced driver assistance systems, such as full speed automatic emergency braking. (AEB only operates at low speeds right now.)

Another unanswered question is what will power the 2021 refresh. A major tear-up of the powertrain package seems unlikely, at least until the Colorado goes through a complete makeover closer to mid-decade. So, for now, expect to see the pickup retain its 200 horsepower 2.5-liter inline-four and 308 hp 3.6-liter V-6, as well as the 186 hp 2.8-liter turbodiesel four.

Meanwhile, we’re confident in predicting we’ll see GMC teasing an update to its own Canyon model in the next few months, if not sooner.

(Bollinger targets the heavy-duty market with its first all-electric pickup.)