Yes, Virginia, there is a stick. 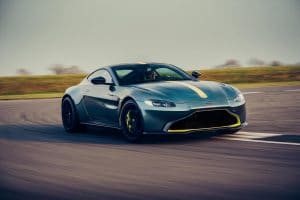 Only 200 of the Vantage AMR models will be produced.

There’s something about that basso profundo rumble that erupts with the touch of the “Start” button. We’ve already gotten a visceral thrill from the 2020 Aston Martin Vantage AMR before we’ve moved an inch.

It’s been little more than a year since the British automaker rolled out the complete makeover of its “entry-level” sports car. But where that might have meant years of waiting for any significant updates, that’s no longer the case. Today’s Aston is a company seemingly in constant motion. It’s not only in the midst of launching seven distinct product lines but also adding an assortment of variants – including the new AMR.

There are a number of subtle updates and upgrades, including some exterior trim pieces and colors, but what’s certain to draw attention is the fact that this limited-edition Vantage line comes with a seven-speed manual transmission, a feature becoming increasingly rare in the sports and supercar markets.

Perhaps fitting for a British brand, the Graziano gearbox does have its eccentricities, starting with its unusual shift pattern, and it does make a few sacrifices, including a 44 pound-feet reduction in torque. But if you’re someone who feels you absolutely must row your own, the Aston Vantage AMR is definitely worth checking out – as we did during a recent visit to Germany. 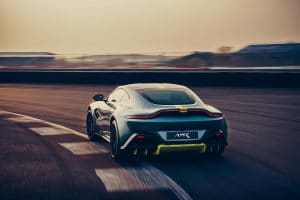 The morning began with the scream of some high-revving Japanese sport bikes outside the window of our hotel room, barely 100 yards away from the finish line at the legendary Nurburgring. Admittedly, to our disappointment, we weren’t going to be getting any track time, though the winding hills nearby, along with a few stretches of Autobahn, would provide more than enough opportunity to push the Vantage AMR to its limits.

At the nearby Aston Martin Performance Center, we got our first look at the special edition of which only 200 will be produced this year. Along with those modest exterior bits, the primary difference between the AMR and a standard-issue Vantage comes in the form of the seven-speed manual, a mechanical limited-slip differential, standard carbon fiber brakes forged 20-inch wheels and staggered Pirelli P Zero rubber.

Oh, and to help offset the loss of torque, the AMR comes in at 3,298 pounds, a full 220 less than the standard-issue Vantage.

Ever slightly more nose-heavy, with 51% of the weight up front compared to 50% with the automatic, the Vantage engineering team also has made some subtle but necessary chassis and suspension tweaks. Spring rate have been reduced in the rear where there now is a stiffer rollbar, as well. There’s the mechanical differential, as opposed to he heavier e-diff with the automatic transmission. And both the drive mode settings and electric power steering have been retuned. During a hard launch, torque is also reduced to ensure you don’t just spin the wheels. 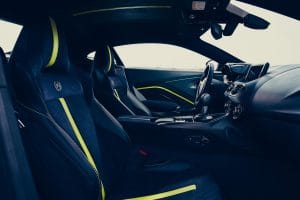 The Graziano gearbox does take getting used to, with its unusual, dogleg shift pattern.

And, despite that lower torque, it would be easy to do considering that, at peak, the AMR still punches out a full 503 horsepower and 461 pound-feet of torque from its 4.0-liter twin-turbo V-8.

Gingerly pulling out of the Performance Center, we head out for a long days drive through the Rhineland hills. With the exception of the unrestricted sections of the Autobahn, there are few straight lines and plenty of hard corners to test out the modified suspension, as well as those Pirelli tires.

The AMR’s revised steering proves uncanny, the car’s grip confidence-inspiring. With each mile we find ourselves pushing a bit more aggressively. Even in the tightest switchbacks the Vantage proves entirely predictable. The setup actually was designed to allow a driver to toss the rear end out a bit, should they so desire, confided Matt Becker, Aston’s director of engineering. And so we give the two-seater a flick as we enter a tight switchback, the tail sliding out just so before we yank it back in line for the next short straight. Oh, what could we have done with the AMR on the 16.1-mile ‘Ring.

While mastering the car’s steering and handling proves intuitive, it does prove a little more of a challenge to lock down the Graziano gearbox. It adopts an unusual, dogleg shift pattern that has reverse to the far left and up, first gear directly below it. Originally designed for track use, Becker explains, there’s little reason to ever go into first gear except at a stoplight. The challenge is remembering that even gears are up, odd gears down. And that’s easier to say than do for someone used to a manual gearbox and where you expect it to be depending upon vehicle speed and engine revs. 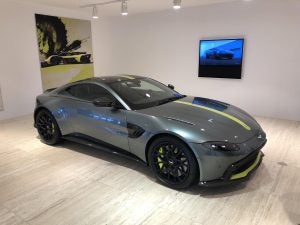 Right now limited to the AMR, Aston will next year offer the manual gearbox as an option on the rest of the Vantage line-up.

At times, we find ourselves in the wrong gear. It hardly seems to matter. While the manual AMR may sacrifice some torque, it almost always seems happy whatever we’ve managed to shift to. You’d have to go from second to fifth to feel the twin-turbo V-8 bog down.

By the end of the day, we’ve become a lot more comfortable with the transmission and expect an owner would likely need no more than a day for the unusual pattern to become locked into muscle memory. Meanwhile,  there are other benefits more than outweighing the learning curve. Aston adopted a twin-chamber master cylinder for the clutch that makes shifts extremely easy, with just amount of pressure required to compress the pedal. By careful tuning of the brake pedal, meanwhile, it’s equally easy to manage heel-and-toe shifts – something, I reluctantly admit, I’m not especially good at.

Now, for a bit more fun, tape the AMR Shift button. The Vantage manual offers rev matching during all downshifts. But now, you can keep your right foot flat to the floor, hammer the clutch and get rev-matched upshifts, as well. It takes a few tries to coordinate your legs and right hand, but once you do, it just feels right.

Okay, we have to add that there is another small sacrifice to going with the manual transmission. Zero-to-60 times are 3.9 seconds, according to Aston, a 0.4 second penalty compared to the eight-speed ZF automatic transmission, but for those who want the added engagement, it hardly seems to matter. 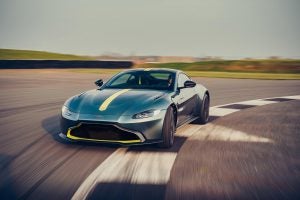 Aston revised the rear springs and rollbar and made other changes to the Vantage AMR that make it easier to flick out the tail.

When word leaked out that Aston was going to walk away from the big V-12 offered for the previous-generation Vantage there were plenty of groans. But those who’ve spent time with the sports car know there was no reason to fret, thanks to Aston’s decision to replace it with a powerplant purchased from Mercedes-AMG.

The two companies have formed a solid working relationship – the German automaker now holding a 5% stake in its erstwhile British rival.

The engine isn’t the only thing supplied by Stuttgart. The Vantage also features Mercedes’ 8-inch infotainment display. Unfortunately, it’s nowhere near as good an acquisition as the V-8. The screen is small and the software operating the system is out-of-date. Aston would do well to acquire Mercedes’ latest MBUX voice assistant technology but no word on when – or, indeed, if – that might happen.

The rest of the interior package marks a big improvement from the relatively Spartan interior of the old Vantage, with the “base” car featuring a combination of leather and Alcantara – and with several upgraded leather packages available. One of the more distinctive features of the Vantage cabin is the nearly rectangular steering wheel. It may look odd, but it actually works quite well, especially during aggressive cornering.

All told, the 2020 Aston Martin Vantage AMR is quite an enjoyable package for those willing to spend about $183,000 – before adding the carbon fiber package and other options that can push it well above $200,000. There are plenty of other options, including the less expensive Porsche 911 Turbo, as well as the Mercedes-AMG GT C sharing the same V-8. But there is something to be prized about owning such a striking, limited-edition Aston.

For those who’d like the seven-speed manual at a slightly more affordable price, hang tight, meanwhile. Aston will add it next year as an option on the standard Vantage line.

Indeed, you may have to wait. It appears that most, if not all, of the Vantage AMR models have already been signed up for.