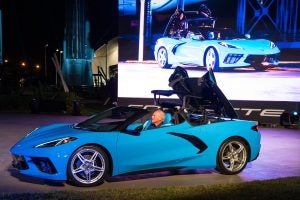 Chevrolet was quick to answer one of the biggest questions following the launch of its all-new C8 Corvette last July, confirming the fact that there would, indeed, be a new convertible version of the mid-engine Stingray. But that left a big question: just how would it work?

The automaker offered the answer Tuesday night, debuting the first-ever folding hardtop version of the sports car. It also used the packed gathering to pull the covers off another version of the ‘Vette, the next-generation race car, to be known as the C8.R.

The decision to go with a folding hardtop was not entirely unexpected. It would have been a challenge to pack in a conventional ragtop, as has been the approach taken with Corvettes generations one through seven – especially considering General Motors officials had promised that the Stingray Convertible would maintain the crisp lines of the coupe model.

(Next Corvette Z06 could hit 800 horsepower. Click Here for more.) 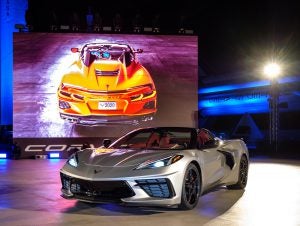 The C8’s folding hardtop can be operated in 16 seconds – and at speeds up to 30 mph.

To go al fresco, a driver simply has to touch one button amongst the array of new controls inside the C8. That sets in motion a series of moves that sees the rear tonneau cover lift up and the top itself fold into two pieces before stowing away in the engine compartment. To minimize the risk of any damage, meanwhile, a composite compartment helps shield the folded roof from engine heat.

Significantly, the new system drops the hydraulics used to operate prior Corvette Convertible tops, opting, instead of a lighter, electric system using six motors. All told, the addition of the folding hardtop roof adds just 102 pounds to the C8’s total mass. Apparently, Chevy engineers reported, there’ll be no loss of performance for the Corvette Convertible which is expected to mean 0-60 launch times of under 3 seconds.

“Our goal from the beginning was to make sure customers didn’t have to sacrifice any functionality, performance or comfort when choosing the hardtop convertible,” Corvette engineering manager Josh Holder said. 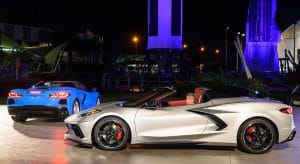 Chevy claims the convertible will suffer no loss in performance, despite the added 102 pounds of mass.

A focus on aerodynamics helps, especially when it comes to the area behind the twin headrests designed to minimize air swirl. Not only the top, but a glass panel mounted behind those headrests, can be raised or lowered with the touch of a button.

The Corvette Convertible’s top can be operated at speeds of up to 30 miles per hour, meanwhile, and stowed away – or put back in place – in just six seconds.

There is, of course, one compromise. The Convertible version of the C8 sacrifices the transparent cover that provides a tantalizing view of the sports car’s 495-horsepower V-8. Nothing comes without a price, it seems. That said, the folding hardtop will only add $7,500 to the price of a new Corvette, meaning a starting price of around $67,500. 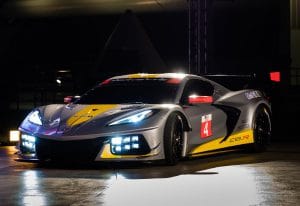 The C8.R race car will make its debut at the 24 Hours of Sebring in January.

That is, of course, if you can find one. Chevy officials had noted that dealers already had taken enough preliminary orders for the 2020 Stingray to nearly last out the model-year. And that was before the angry strike that has shut down manufacturing operations at General Motors plants across the U.S. The walkout is now in its third week with no clear sign as to when a settlement might be reached, so that is delaying the formal roll-out of the C8, among other GM products.

As for the C8.R race car, it has additional aerodynamic modifications, including new splitters and a massive rear wing. It is wider than the street car, especially in back, where the fenders have been stretched to house larger tires. There are more cooling vents, as well, along with new lighting

Not surprisingly, Chevy’s motorsports team was tight-lipped when it came to specific details, including engine size and power. The current Corvette race car, the C7.R, is powered by a 5.5-liter V-8 pumping out just under 500 horsepower. Whether Chevy will increase the pony count is uncertain but could be limited by the rules of the various series in which it competes, including the LMGTE class for Le Mans, and the GTLM class for the IMSA WeatherTech SportsCar Championship.

What we do know is that the C8.R will make its first competitive run at the Rolex 24 at Daytona in January, again competing in the GTLM class.