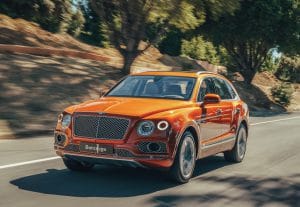 Bentley is finally delivering the plug-in hybrid version of its big Bentayga SUV, the first of what it says will be an array of “electrified variants” set to debut during the next four years.

The Bentayga Hybrid will be the most fuel-efficient model the British automaker has ever delivered, it claims, though it has yet to release specific EPA mileage ratings. It also will deliver 24 miles of all-electric range, using the latest European test cycle, though that’s likely to drop when U.S. numbers are released.

The Bentayga becomes the first super-premium model to get a plug-in hybrid option, but PHEVs are becoming increasingly common in other luxury segments. Mercedes-Benz, for one, now has 10 in its global line-up. Other top-end manufacturers are expected to follow, though brands like Aston Martin, Lamborghini and Ferrari are also exploring conventional hybrid and pure electric alternatives.

(Bentley Offers Glimpse of Its Future with EXP 100 Centenary Concept)

The launch of the Bentley Bentayga Hybrid coincides with the brand’s 100th anniversary and is being pitched as part of its second-century transformation. The Volkswagen Group subsidiary is working to address the challenges it will face as regulators around the world put in place increasingly strict mileage and emissions mandates. 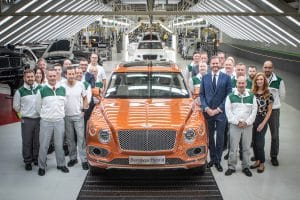 The Bentayga Hybrid is the first PHEV model in the company’s 100-year history.

“The delivery of the first Bentayga Hybrid models is an historic moment for Bentley,” said Peter Bosch, Bentley’s member of the Board for Manufacturing, “taking us a step closer to the rollout of truly sustainable luxury mobility solutions. As we prepare for the next 100 years, we are investing significantly in new initiatives that reinforce our commitment to sustainability, as demonstrated by the visionary all-electric Bentley EXP 100 GT concept.”

Moving forward, Bentley plans to trim weight off its traditionally hefty products, offer more downsized engines and expand its use of electrified options. That is expected to include additional plug-in hybrids as well as all-electric models previewed by the EXP 100 GT concept.

The goal, the company said in a statement, is “offering a hybrid or electric variant of all models by 2023. The marque is targeting the introduction of the first ever fully electric Bentley by 2025.”

The first of the coming breed, the Bentley Bentayga Hybrid pairs a 3.0-liter turbo-V-6 gas engine with a single electric motor. That “E Motor” can serve double duty, generating power to keep the batteries charged, as well as adding more power to the combined drivetrain. It punches out 94 kilowatts, or 126 horsepower, and 400 Nm, or 295 foot-pounds, of torque. The combined drivetrain makes 700 Nm, or 716 lb-ft – Bentley not releasing combined horsepower numbers.

That can launch the big SUV from 0 to 60 mph in 5.2 seconds, about 1.5 seconds slower than the Bentayga V-8. Top speed is 158 mph. Using European testing procedures, the Bentayga Hybrid burns 3.5 liters of gas per 100 kilometers, or about 67.6 mpg, easily making it the most fuel efficient model Bentley offers. 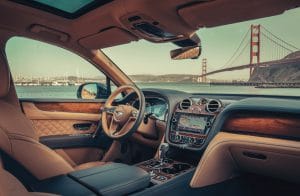 It’s a plug-in hybrid, but inside it’s still a Bentley.

Luxury automakers face a particularly tough challenge dealing with future government mandates. That includes the possibility that some cities will ban vehicles operating in anything but all-electric mode. In China, Bentley’s largest market, the latest rules heavily incentivize plug-based models, like the Bentayga Hybrid.

Most super-premium luxury automakers expect to offer plug-based options by the middle of the coming decade.