VW Charges Into Frankfurt With Production Version of ID.3 Battery-Car

VW's first long-range electric will soon be followed by an array of battery-cars.

Volkswagen rolled out the long-awaited production version of its ID.3 electric vehicle.

It’s by no means a secret. Unlike many of the new models set to debut at the Frankfurt Motor Show this week, Volkswagen has already shown a concept version of its first long-range battery-electric vehicle and even begun taking advanced orders for the new ID.3.

Now, however, potential buyers will get their first look at the production version and learn a lot more about what it has to offer, starting with the “scalable” electric drive system that, the automaker claims, will offer as much as 550 kilometers, or nearly miles, of range, depending upon which of the optional battery packs a customer chooses.

Even before the official debut, the VW ID.3 has set off a flurry of interest, however, with the German automaker reporting that it has already taken advance orders for all 30,000 of the First Edition models it will launch with.

The Frankfurt show will not only see the launch of VW’s first long-range battery-electric vehicle, but also introduce an all-new sub-brand of BEVs that will eventually include several dozen different models. Adding in the battery-cars and crossovers that the German giant plans to sell through other divisions, such as Seat, Audi and Porsche, the Volkswagen Group intends to have nearly 50 battery-electric vehicles on the market by the middle of the coming decade. All told, it is investing about 11 billion euros, or $12.1 billion in the effort, part of its “goTOzero” strategy. 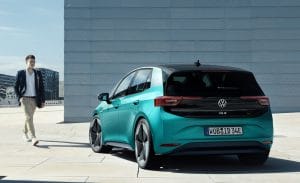 According to European specs, the new ID.3 will travel 261 miles on a charge.

At first glance, the ID.3 might be mistaken for the familiar VW Golf, though the compact hatchback is sleeker and more aerodynamic, with a shorter nose and a more steeply raked windshield. There’s less chrome and more distinctive lighted accents, VW suggesting in a news release that “light is the chrome of the future.”

The ID.3 is based off the company’s new MEB modular architecture, a platform that will be used for the majority of the electric vehicles the broader group plans to bring to market, though Porsche and Audi are developing a separate architecture for more expensive and higher-performance models.

Taking aim at such competitors as the Chevrolet Bolt and the Tesla Model 3, the ID.3 is targeting a decidedly mainstream audience. While the First Edition model goes for around 40,000 euros, or $44,100, the base model comes in at “under 30,000 euros,” in the German market, according to the automaker, or just over $33,000 at current exchange rates.

(For the moment, at least, VW is not planning to bring the new car to the U.S. market, so there is no estimate of what it would command in the States.)

“The vehicle’s price will be comparable to that of typical compact vehicles following the deduction of the anticipated government subsidies,” said the automaker, making it “an electric car for the masses.” The fact that there have been so many initial hand-raisers suggests VW may be onto something.

The First Edition models will all come with a 58 kilowatt-hour battery, a pack slightly smaller than what is currently offered in the Chevy Bolt. Using the latest European WLTP testing cycle, VW estimates that will yield around 420 km, or 261 mile, range. Subsequently, VW plans to add two optional packs: 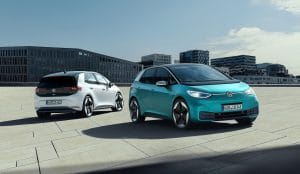 The new ID.3 will come with three battery packs eventually with a range from 207 miles to 342 miles.

Those figures would likely be as much as a third lower using the EPA test cycle were VW to eventually decide to bring the ID.3 to the States.

As for charging, the battery-car can connect to some of the newest Level 3 fast-chargers, drawing as much as 100 kilowatts of juice – enough to add 290 km, or 180 miles, of range in just 300 minutes.

Buyers of the ID.3 First Edition will get 2,000 kWh worth of electricity for free using the fast-growing European WeCharge network of public charging stations.

The batteries are located below the car’s load floor, as is the ID.3’s single permanent magnet synchronous motor – which drives the rear axle through a single-speed gearbox. The company has not yet revealed specific torque or horsepower numbers, nor performance figures.

As with other recent battery-car entries, the use of a skateboard-like platform frees up space for passengers and cargo. There will be 13 cubic feet of storage space behind the second-row seats. The lack of a center tunnel, normally needed for a driveshaft, further increases usable interior space.

The Volkswagen ID.3 will feature an array of smart safety and infotainment technologies, a mix seemingly required by the sort of tech-oriented buyers who have begun migrating to the EV market. 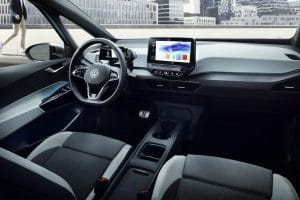 The ID.3 uses 10-inch touchscreen to control a variety of vehicle functions.

“Only the electric windows and hazard warning lights are still operated using tactile switches,” noted a news release. “This is supplemented by intelligent natural voice control. Drivers or front passengers can speak to the ID.3, simply by saying “hello ID.” Visually, ID. Light signals to whom the ID.3 is currently responding.”

While the First Edition has clearly generated strong interest among European car buyers, it remains to be seen how the broader Volkswagen ID.3 line-up will fare. The good news for the automaker is that battery-cars are beginning to gain some momentum after a slow start on the Continent. In Norway, for example, they now account for more than half of the market’s new vehicle sales.

VW is hoping that buyers in other parts of Europe will also start plugging in.