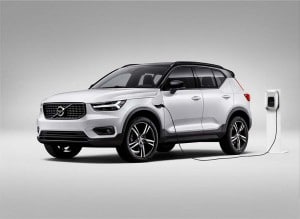 Volvo is going full electric on the XC40 in October, making it the company’s second full-electrified vehicle.

Volvo’s XC40 has been one of its top selling models since its introduction and now a new version of the ute is likely to provide another boost to its numbers: The electric XC40 is coming in October.

The Swedish/Chinese automaker isn’t just debuting a new EV to its line-up, but it must also live up to the company’s long-standing reputation for safety, and it certainly does that regardless the issues that battery electrics present.

“Regardless of what drives a car forward, be it an electric machine or combustion engine, a Volvo must be safe,” said Malin Ekholm, head of safety at Volvo Cars. “The fully electric XC40 will be one of the safest cars we have ever built.”

While building on the excellent safety standards of the original XC40, Volvo Cars safety engineers had to completely redesign and reinforce the frontal structure to deal with the absence of an engine, meet Volvo Cars’ high safety requirements and help keep occupants as safe as in any other Volvo. 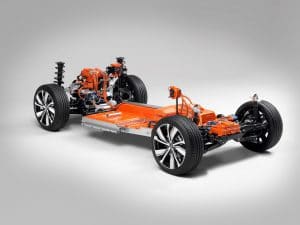 The fully electric XC40 SUV – Volvo’s first electric car and one of the safest on the road.

“The fundamentals around safety are the same for this car as for any other Volvo. People are inside, and the car needs to be designed to be safe for them,” Ekholm said.

The new XC40 got a redesigned safety structure in order to protect the SUVs passengers as well as the battery. The battery sits within the safety cage which is made of extruded aluminum and rests in the middle of the ute’s body structure. This design creates a built-in crumple zone around the battery.

As is the case in many other EVs, the battery is placed in the floor of the XC40, lowering the center of gravity. This provides better handing and reduces the risk of rollover.

Meanwhile, the car’s body structure has not just been reinforced in the front, but also at the rear. Here, the electric powertrain has been integrated in the body structure to realize a better distribution of collision forces away from the cabin and reduce the strain on people inside the car. 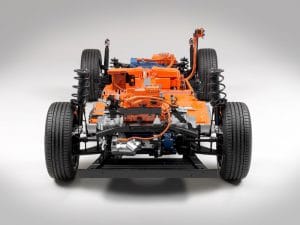 The fully electric XC40’s structure was redesigned to protect the battery and passengers.

The new ADAS platform is a modern, scalable active safety system that consists of an array of radars, cameras and ultrasonic sensors. Because of its scalable nature it can easily be developed further and lays the foundation for the future introduction of autonomous drive technology.

The automaker recently released its first all-electric vehicle, the Polestar 2 at the Geneva Motor Show. That vehicle will hit the market in 2020. Volvo said at the time it expects all-electric, or BEV, models to account for fully half of its global sales by 2025. And that doesn’t include the mild, conventional or plug-in hybrid products that will flesh out the rest of the Swedish automaker’s line-up.