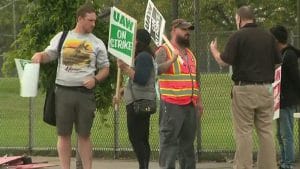 The UAW walked out of GM plants last night and on to picket lines.

The strike by the United Auto Workers, which started early Monday, is certain to have an impact on General Motors’ bottom line of which the company’s executives are painfully aware.

GM has earned more than $35 billion during the past three years and the company’s guidance to investors prior to the strike indicated the trend was expected continue through the third and fourth quarters since vehicles sales in the U.S. remain relatively healthy. GM has also approved $14 billion in stock buy backs since 2015.

The automaker’s financial success also represents a fat target for UAW bargainers, who said the company has made more than enough money to address union concerns about wages, benefits and the status of temporary workers.

“We stood up for General Motors when they needed us most. Now we are standing together in unity and solidarity for our members, their families and the communities where we work and live,” said UAW Vice President Terry Dittes, who is the director of the union’s GM department and the head of the union negotiating team.

Shutting down North American production will cost GM $400 million per day, noted the investor website Seeking Alpha, which quoted figures compiled by the Center for Automotive Research in Ann Arbor, Michigan. Seeking Alpha also noted CAR estimated GM has enough inventory for a short strike of one or two weeks. After that it starts to get “painful.”

The International Brotherhood of Teamsters announced that its members would not cross picket lines to haul cars stockpiled at GM assembly plants for shipment to dealers around the country.

GM insisted it has made a generous offer to union bargainers, including a proposed $8,000 “ratification bonus,” an amount double what UAW members got after ratifying the 2015 contract.

The automaker also said it was willing to put up $7 billion in new investment in factories around the U.S. and in new vehicles such as an all-electric pickup to protect the jobs of UAW members. In addition, GM also promised to address issues revolving around unallocated GM assembly plants in Detroit and Lordstown, Ohio.

Sources close the UAW, however, said the talks have been stalled since the opening ceremony in July and only about 2% of the contract language was in place by the time the old contract expired. Some of the GM’s proposals didn’t arrive until 90 minutes before the deadline.

The union also making an effort to keep the talks centered on economics and off the scandal hovering over the union’s executive board. “This is about the members,” Brian Rothenberg, UAW spokesman, said, noting that the decision to strike was approved unanimously the 200-member of the UAW’s GM Council of local officers.

One member of the UAW executive board, Vance Pearson, is due to appear before a federal magistrate in St. Louis, Missouri, to determine if he will be turned over to officials for the U.S. Department of Justice to face criminal charges in Detroit.

Pearson is considered a confidant of UAW President Gary Jones. Agents from the Federal Bureau of Investigation searched Jones’ private residence outside Detroit at the end of August and items seized during the raid were cited in the affidavit, charging Pearson with conspiracy and embezzlement.

Jones did not face reporters during the press availability after the council meeting in Detroit and Rothenberg declined to discuss his whereabouts.